Bayern down Lazio to stroll into Champions League quarter-finals 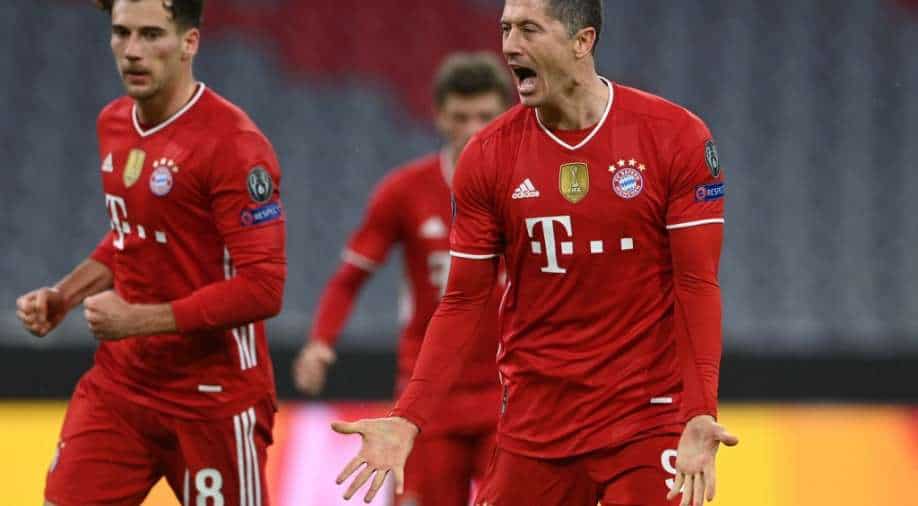 Holders Bayern Munich cruised into the Champions League quarter-finals as a 2-1 win over Lazio in Wednesday's last-16 second leg sealed a 6-2 aggregate victory.

Holders Bayern Munich cruised into the Champions League quarter-finals as a 2-1 win over Lazio in Wednesday's last-16 second leg sealed a 6-2 aggregate victory.

Robert Lewandowski converted a penalty before a deft chip from his second-half replacement Eric Maxim Choupo-Moting doubled the advantage on the night.

Lazio grabbed a consolation when Marco Parolo was left unmarked to head in a late free-kick from close range.

"The win is very important to us. It's in our DNA that we want to win every game," Bayern midfielder Joshua Kimmich told Sky.

"We played confidently, even if it wasn't a brilliant performance and it was annoying to concede a goal."

Their passage into the last eight takes Bayern past Barcelona's tally of 18 Champions League quarter-final appearances since the competition was rebranded from the European Cup.

Snow fell during the game at the Allianz Arena, but Bayern made light work of the wintry conditions.

They extended their unbeaten run in the Champions League to 19 games over two years.

"We needed a good performance and we bow out of the competition with a positive game," Lazio coach Simone Inzaghi told Sky.

"Some teams are unplayable: Bayern are one of them."

With his side trailing 4-1 from the first leg, Inzaghi opted to rest top-scorer Ciro Immobile, with the 1.94m-tall Vedat Muriqi starting up front.

Bayern had captain and Germany goalkeeper Manuel Neuer sidelined by a cold as understudy Alexander Nuebel made only his third start of the season.

Bayern were awarded a penalty on 31 minutes when Muriqi brought Leon Goretzka down in the area.

After a VAR review, Lewandowski smashed in the resulting spot-kick.

It was the Poland star's 39th goal in all competitions this season and fifth in the Champions League.

It was one of his last involvements as he and Thomas Mueller made way for Choupo-Moting and 18-year-old Jamal Musiala.

Less than two minutes later, David Alaba slid a pass through for Choupo-Moting to sprint onto and flick a shot over Reina.

Bayern were guilty of sloppy defending eight minutes from the final whistle when Andreas Pereira's free-kick was headed home by Muriqi's replacement Parolo.

Lazio defender Francesco Acerbi said the Italians played better than in their heavy first-leg defeat, but admitted that "Bayern are probably the best in the world".