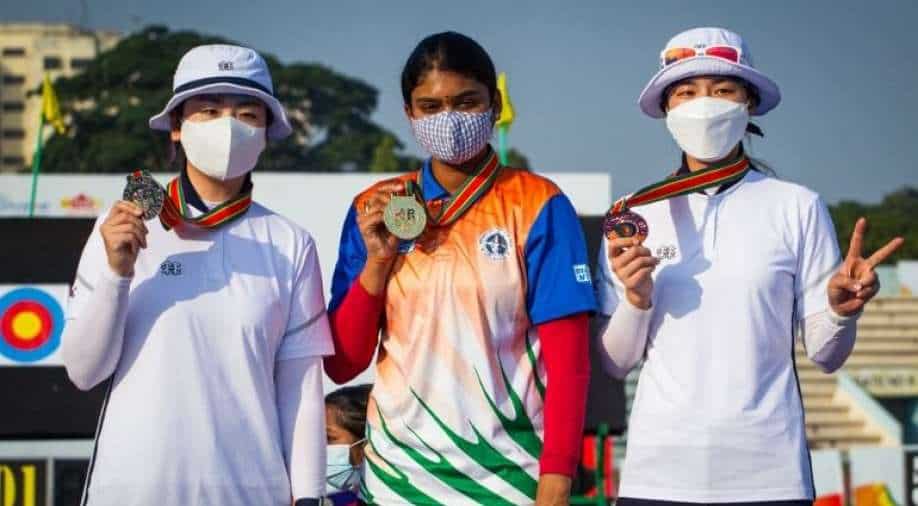 India's Jyothi Surekha Vennam clinched gold in the women`s compound final at the Asian Archery Championships 2021 on Thursday in Dhaka.

The 25-year-old Indian enjoyed a perfect start to the final shooting 30 with the first set of three arrows, compared to the Korean's 29. However, a wobble in the second set with a score of 28 meant that Oh Yoohyun equalised at 58-58.

Jyothi came back strongly in the third set as she shot a perfect 30 again, while Yoohyun replied with 28 and handed a two-point lead. Both archers didn't take their step from the pedal in the fourth set as they shot the perfect 30s and the Indian maintained a two-point lead.

Though Jyothi wasn't able to hold her nerve in the final set with two 9s, a controversial final arrow from Oh Yoohyun handed India their first gold medal of this edition of the Asian Archery Championships.

Earlier in the day, the Indian compound mixed team of Rishabh Yadav and Jyothi Surekha Vennam settled for silver. The Korean pair of Kim Yunhee and Choi Yonghee defeated the Indians by a narrow margin of 155-154.