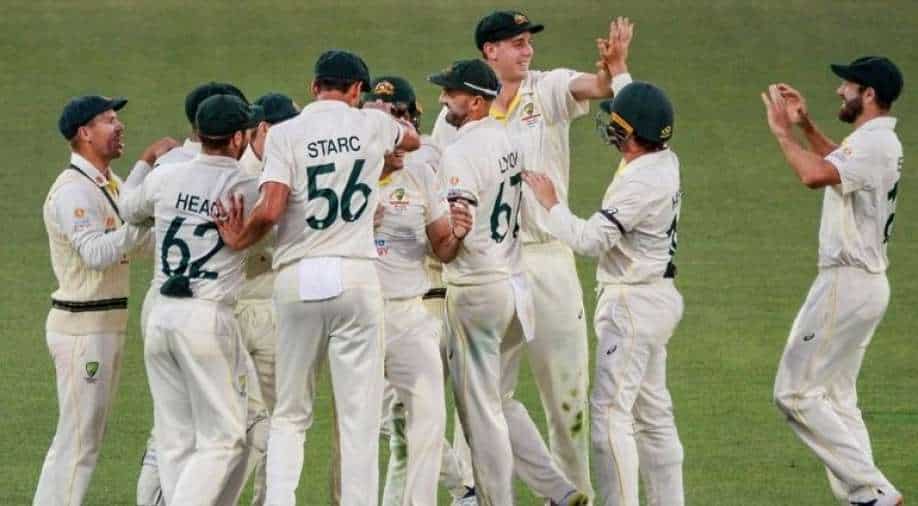 Joe Root's men will head to Melbourne for the Boxing Day Test starting Sunday knowing that the only instance of a team coming from 2-0 down to win the Ashes was Donald Bradman's Australia way back in 1936-37.

Australia ground down a battling England to win the second Test in Adelaide Monday and go 2-0 up in the Ashes series, leaving the visitors' dreams of winning back the hallowed urn in tatters.

England resumed day five of the pink ball Test in deep trouble at 82 for four chasing a massive 468 to win, realistically needing a miracle just to salvage a draw.

They gamely hung on into the final session, fighting a desperate rearguard action until ultimately crumbling to be all out for 192, crashing to a 275-run defeat.

Jhye Richardson was the pick of the attack with 5-42.

England slumped to defeat by nine wickets in the first Test at Brisbane and the loss this week means their hopes of winning back a trophy they last secured on Australian turf in 2010-11 are all but over.

ALSO READ: WATCH: Ricky Ponting left in splits as Joe Root struggles to run after being hit on the box during 2nd Test

Joe Root's men will head to Melbourne for the Boxing Day Test starting Sunday knowing that the only instance of a team coming from 2-0 down to win the Ashes was Donald Bradman's Australia way back in 1936-37.

"The reason it's disappointing is because we made the same mistakes. I think we could have bowled a lot fuller, and with the bat we need to be better, make bigger scores and apply better," said Root.

"The second innings is the attitude and desire we need. It's frustrating because we know we are better. Lessons learnt, we have to be better in the next game."

With Root, the world's number one Test batsmen, removed by Mitchell Starc in the final over on Sunday evening, England's hopes appeared to rest with allrounder Ben Stokes.

The 30-year-old has so often rescued his team, with memories of his match-winning exploits against Australia at Headingley in 2019 to keep that series alive still fresh.

But trying to nurse England's batting through 90 overs against Australia's relentless bowling was too big a task, even for him.

He put his head down and lasted 77 balls for 12 runs before Nathan Lyon struck. The umpire initially gave the lbw shout not out, but Australia reviewed and it was shown to be plumb in front.

Ollie Pope lasted only seven balls, edging to Steve Smith at slip off Starc, out for four to go with his disappointing first innings' five.

But Jos Buttler (26) and Chris Woakes (44) dug in, frustrating Australia in a 61-run stand before Jhye Richardson clattered Woakes' stumps.

Ollie Robinson made a dogged eight before Smith took his sixth catch of the match to dismiss him off Lyon, then Buttler incredibly fell after surviving nearly 35 overs by stepping on his own stumps.

"I wasn't nervous. I think Jos played very well, and played over 200 balls, so it was good resistance along with Woakes and Robbo," said interim Australian skipper Smith.

"We wanted to stay calm because we knew it would take a couple of good balls and a couple of wickets to get the win.

"I had fun this week, enjoyed it," he added. "The guys played well, controlled the game from the first day."

England's chances of victory had been nigh on impossible -- no team had ever posted such a big fourth innings score to win in Test cricket history, with the West Indies' 418 for seven in beating Steve Waugh's Australia at St John's in 2003 the highest.

Their problems stemmed from losing seven wickets for 86 runs as they collapsed to 236 all out in the first innings in reply to Australia's 473 for nine declared, with only Root (62) and Dawid Malan (80) showing any backbone.

They also blundered by leaving out Jack Leach, ignoring the warnings of Adelaide Oval's head groundsman before the game that it would be a mistake to not play a specialist spinner.

"In hindsight, you might say we should have picked a different side," he said, with returning veteran seamers Jimmy Anderson and Stuart Broad claiming just five wickets between them.

While England struggled, Australia excelled under Smith after Pat Cummins was ruled out hours before the start over a Covid scare.

ALSO READ: Salman Butt on chances of Rohit replacing Kohli as Test captain: Will be clear, there is tension between them

Workhorse Marnus Labuschagne again reinforced his status as one of the world's premier batsmen, slamming 103 in the first innings and 51 in the second.

In contrast to England's batting, Australia showed more depth with five of their top six scoring fifties. Opener Marcus Harris was the only failure.

And even with pace spearheads Cummins and Josh Hazlewood missing, Jhye Richardson and Michael Neser ably complemented Starc and Lyon, along with fast-improving all-rounder Cameron Green.