WATCH: Ricky Ponting left in splits as Joe Root struggles to run after being hit on the box during 2nd Test 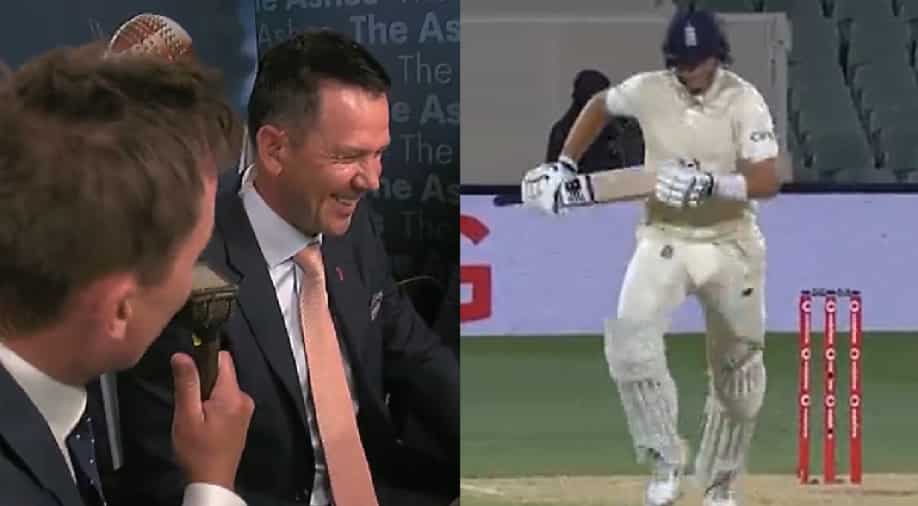 Ricky Ponting was left in splits as Joe Root struggled to run after being hit on the box. Photograph:( Twitter )

England captain Joe Root was struggling to run after being hit on the box by a delivery from Aussie pacer Mitchell Starc during Day 4 of the second Ashes Test in Adelaide on Sunday.

England had another bad day at the office as Australia once again dominated the proceedings on Day 4 of the onging second Test in Ashes 2021-22. The hosts rode on half-centuries from Marnus Labuschagne (51) and Travis Head (51) to help Australia extend their lead past the 450-run mark and set up a daunting target of 468 runs for England.

England batters were expected to stage a fightback, however, the visitors were further pinned back by the Aussies after losing opener Haseeb Hameed cheaply on a duck in the second over of their second innings. The visitors then lost Dawid Malan (20), Rory Burns (34) and Joe Root (24) by the end of Day 4's play to be reeling at 82/4 with a staggering 386 runs to chase.

For Root, the day went worse from bad as he copped a blow on the box off a delivery from left-arm pacer Mitchell Starc. Root, who had been taken for scans after an abdomen injury during England's first innings, was once again hit around the same region and needed physio's attention.

Root was clearly in pain and not comfortable as he was sene struggling to complete a run after being hit on the box. Root's funny way of completing the run due to the pain left the commentators, including former Australia captain Rickey Ponting in splits. Ponting is part of the commentary panel for 7Cricket for the ongoing Ashes 2021-22.

While some criticised the commentators for their gesture, some fans saw the funny side of the things as the video went viral on social media. David Warner, who was fielding first slip, was also seen smiling as he saw Root complete the run uncomfortably.

Australia close in on back-to-back wins

Australia are currently 1-0 ahead in the Ashes 2021-22 after winning the first Test at The Gabba by nine wickets and care closing in on another big win in Adelaide. The hosts, who picked up four wickets in England's second innings on Day 4, are only six wickets away from clinching the second Test and making it 2-0.