Myanmar newspaper journalists held after handing themselves in to police 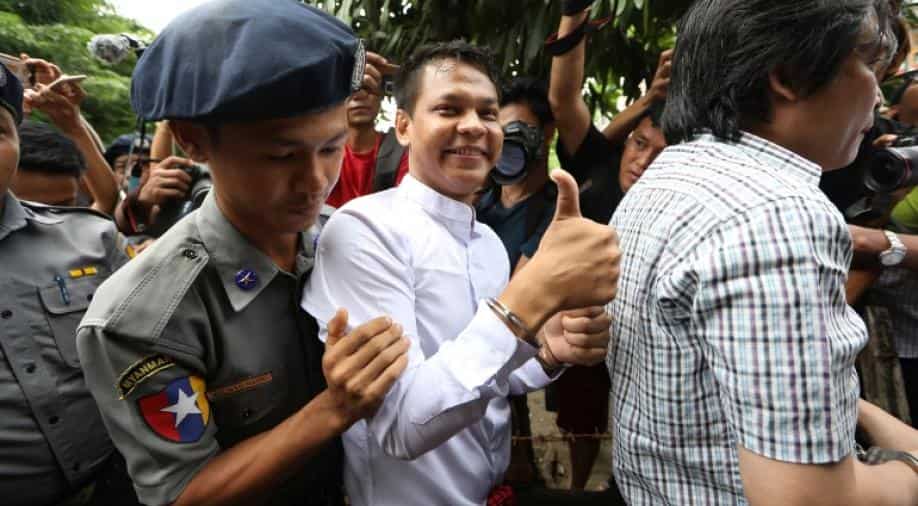 Phyo Wai Win, a reporter at Eleven Media arrives after being detained at Tamwe court in Yangon, Myanmar. Photograph:( Reuters )

Three senior journalists at Myanmar's largest private newspaper were remanded in custody after handing themselves in to police on Wednesday, facing accusations of causing "fear or alarm" following a complaint from the Yangon regional government.

One of the men, Eleven Media Group's editor-in-chief Kyaw Zaw Linn, had earlier told Reuters that police raided the paper's offices at about 7 p.m. on Tuesday, but he and two other journalists sought by the authorities were not there.

"The office informed me that they came because of an article in the journal," he said, shortly before entering a police station in central Yangon's Tamwe township with lawyers on Wednesday morning.

Hours later the three journalists were taken in handcuffs to Tamwe township court, where they were remanded in custody to Insein Prison, northern Yangon, until Oct. 17.

Defence lawyer Kyi Myint told reporters outside the courthouse that the Yangon regional government had filed a complaint over an article by the paper's chief reporter Phyo Wai Win. The article, published on Monday, included quotes from regional lawmakers raising questions about public spending, including on an overhaul of transport in the country's commercial hub.

The chief minister's assistant, Maung Maung Kyi, declined to comment on the complaint filed by the regional government, referring all questions to an information department that Reuters was unable to reach on Wednesday. National government spokesman Zaw Htay did not answer a call seeking comment.

Police told staff at Eleven Media on Tuesday evening that a case had been opened against Kyaw Zaw Linn, Phyo Wai Win and editor-in-charge Nayi Min under Section 505 (b) of the country's colonial-era penal code, said Ko Oo, an editor at the paper.

Section 505 (b) prohibits publishing information that may "cause fear or alarm", that could cause someone to commit an offence, or disrupt "public tranquillity". It carries a maximum penalty of two years in prison.

Lawyer Kyi Myint said the trio's defence would be that the article was accurate.

"I didn't write anything wrong," said Phyo Wai Win as he entered the police station. "I only wrote the truth."

The Foreign Correspondents Club of Myanmar said in a statement it was "deeply shocked and disturbed" by the arrest of the three journalists, while Amnesty International's director of crisis response, Tirana Hassan, called for their immediate release.

Free speech advocates say press freedom in Myanmar has retreated under the administration of Nobel laureate Suu Kyi, who took power in 2016 under a constitution that preserves the military's role in politics despite a formal end to decades of army rule.

A total of 38 journalists have faced charges under various laws during her administration, freedom of expression group Athan said last month.

Last month, a former newspaper columnist who was harshly critical of Suu Kyi on Facebook was sentenced to seven years in prison for sedition.

The chief executive and another editor of Eleven Media were detained for nearly two months in late 2016 on charges relating to a complaint made by Yangon Chief Minister Phyo Min Thein over a Facebook post alleging corruption in his ties with local businessmen. Phyo Min Thein told a news conference at the time that the allegations were "intended to defame my personal dignity". Eleven Media published an apology.

Thai judge shoots himself in court after railing at justice system