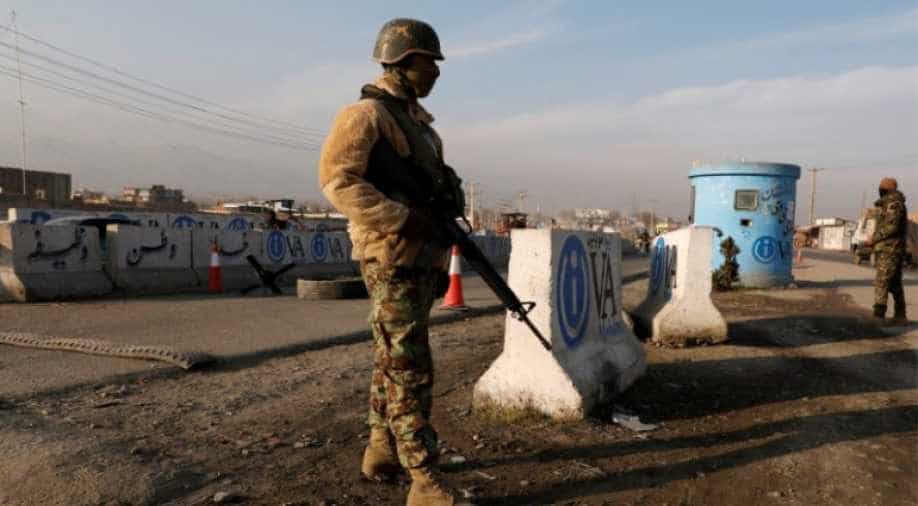 The post in Wardak province west of Kabul has been hit before, and its sagging blast walls and teetering sandbags make clear the vulnerability of the 13 troops living there for weeks on end.

Only a tangle of razor wire marks the entrance of a remote Afghan army checkpoint that may soon be shuttered as the government closes vulnerable outposts after years of losses to Taliban fighters and desertions.

The post in Wardak province west of Kabul has been hit before, and its sagging blast walls and teetering sandbags make clear the vulnerability of the 13 troops living there for weeks on end.

Now, after years of brutal attacks and mass desertions from similar checkpoints, the Afghan government is acting on long-standing American requests to close them.

The aim is to shutter outposts where troops are often left like sitting ducks for Taliban attackers and consolidate them onto larger bases -- several of which are under construction.

The plan is for troops to lead offensive missions, taking the fight to the Taliban instead of trying to survive day-to-day in often deplorable living conditions with little outside support.

The "checkpoint is a failed tactic," Dadan Lawang, an Afghan army general, said recently at a US base in Paktia province, south of Kabul.

Some 50 per cent of military casualties occur at checkpoints, he said, a grim number considering tens of thousands of Afghan troops have been killed or wounded since the end of 2014 -- losses the massively depleted Afghan military can ill afford.

"We want to draw down all those checkpoints and establish strong bases now," Lawang told AFP.

The idea of closing checkpoints has been taboo in Afghan politics for years.

A tiny fort flying the black-red-and-green national flag sends a message that the government holds an area, and Afghan politics is built on a patchwork of alliances with regional power brokers, many of them in remote places.

"To maintain an alliance sufficient to remain in office... the president of Afghanistan has often preferred to push troops out into locations that make no military sense but are politically important," said Stephen Biddle, a professor at Columbia University in New York who has written extensively about Afghanistan.

US Army Brigadier General Kevin Admiral, who heads the US military's Task Force Southeast, said it was challenging to finally change the Afghan military's view.

"They have a lot of political pressure at the local level with district governors and parliamentarians who have said this is our only visible representation of (the government) in these remote areas," he said.

For General Scott Miller, who leads NATO's Afghanistan mission and the US war effort in the country, the closure of checkpoints is crucial for the Afghan military.

"They don't lose people in (offensive) operations, they kill Taliban," Miller told US military officials at a recent meeting.

"You want to hear my (tactical) priorities? Talk about checkpoints."

On a visit to the Wardak checkpoint last week, Miller said he wanted to open Afghan commanders' eyes to the perilousness of such outposts.

The scruffy camp, where troops sleep in converted shipping containers with smashed windows, is a short distance from Highway 1 -- a key route for sending goods and supplies into Kabul and around the country.

But despite its strategic location, troops at the checkpoint and others like it often go without regular food or pay because of mismanagement and corruption.

And if an attack does come, back up may never arrive.

On Miller's visit, US snipers and soldiers secured the isolated facility's perimeter and one Afghan soldier complained to his higher-ups about not having been paid for three months.

Asadullah Khalid, Afghanistan's acting defence minister, blamed a documentation issue and said it would be fixed.

His staff dished out several $100 bills to soldiers from a wad that Khalid said was a gift for Eid, the festival marking the end of Ramadan.

"I want to make sure that everyone sitting on a checkpoint gets a paycheck and food," Miller told AFP.

"It's a leadership issue. These are things we take for granted."

While critics agree Afghan checkpoints have little tactical value, they differ over whether withdrawing troops to bases will make them more willing to fight.

Closing checkpoints "essentially cedes ground to the Taliban and gets the (Afghan security forces) onto larger bases, where they often hunker down," said Bill Roggio, a senior fellow at the Foundation for Defense of Democracies think tank in Washington.

But Colonel David Butler, a US military spokesman in Kabul, said Afghan troops "are doing more independent operations and are more effective during those operations."