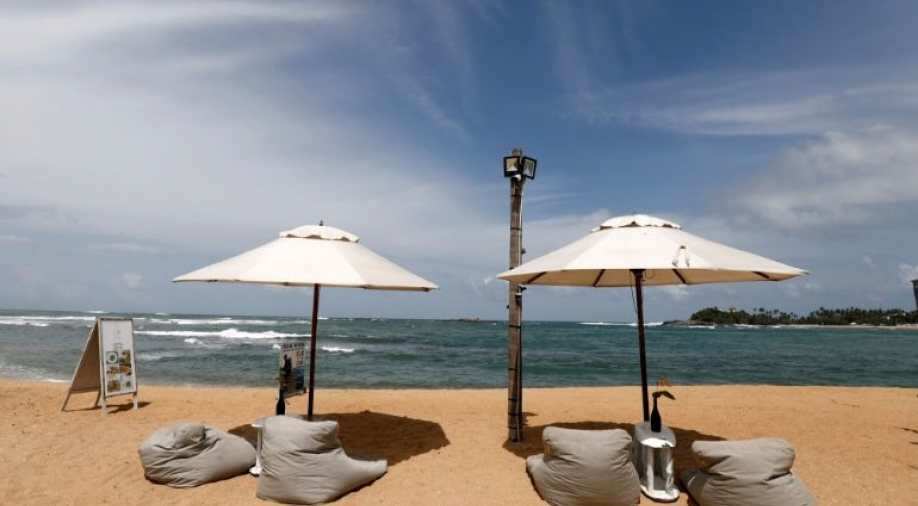 An empty beach seen in front of the Pearl Divers, a diving school, at Unawatuna beach in Galle, Sri Lanka. Photograph:( Reuters )

The economy of Sri Lanka, a sun-drenched island in the Indian Ocean, depends heavily on the $4.4 billion tourism industry. Small businesses like Pearl Divers have been on the rise since the nation`s civil war ended in 2009 and tourists poured in.

Pearl Divers, a diving school on one of Sri Lanka`s most popular southern beaches, shut shop for two months after suicide bombers attacked churches and hotels on the island on Easter Sunday, killing about 250 people. It had no customers as tourists cancelled holidays, and its manager Nuwan Harshana says he took two months leave and a pay cut.

Last week, he dusted off the diving equipment and boats, used to carry scuba enthusiasts off the shore of Unawatuna beach, in the hope that foreigners will start to trickle into the country again and the shop can slowly build back to the $800 a day in revenue it made before the attacks.
But there is no sign of any quick upturn in his fortunes.

"Everything was good before April. Now that situation is finished ... there are no customers," said Harshana, who said he is worried about earning enough to look after his wife and two children, while also meeting his monthly loan payments.

The economy of Sri Lanka, a sun-drenched island in the Indian Ocean, depends heavily on the $4.4 billion tourism industry. Small businesses like Pearl Divers have been on the rise since the nation`s civil war ended in 2009 and tourists poured in.

But after the bombings in April, tourist arrivals slumped 70 per cent in May and 57 per cent in June from a year earlier. Many small businesses, that employ thousands, are now either forced to lay off staff or have them work for minimal pay.

This is already having a domino effect on the economy, further hitting consumer demand.

The government has introduced a series of measures to boost tourism, including lowering airport charges, cutting taxes on jet fuel and pushing hotels to offer discounts. It is planning to relax visa rules for residents of a number of countries.

It has also asked banks to lower lending rates and give loan moratoriums. But the relief is yet to reach many small businesses that make up the backbone of the economy.

"Clearly it took banks a bit of time to gear up for it ... As they had to work out the decision-making process," central bank governor Indrajit Coomaraswamy said on Thursday.

Dilum Ranjana, who owns a foot spa in the fort city of Galle in the south, said he had to fire three of seven employees and postpone plans to open a second branch because he was getting hardly any income in the past couple of months.

"It is not easy to get a loan, there is a lot of paperwork and bureaucracy," said Ranjana, who has monthly expenses of $2,300 in rent, bills and salaries. He said he has so far made $570 in July, a tenth of what he did last year.

"All my plans are lost, they are ruined," he said.

Tourism was the third largest and fastest growing source of foreign currency for Sri Lanka last year, and accounted for 4.9 percent of the country`s gross domestic product (GDP) in 2018.

The government expects a shortfall of $800-900 million in tourism revenue this year, which will widen its current account deficit to 3per cent of GDP from the 2.3 per cent it had earlier expected, a top central bank official told Reuters.
The central bank has also slashed its growth forecast for the year to 3per cent from 4 per cent earlier.

"The main concern is rising non-performing loans due to sluggish economic growth after the attacks," the official said.

When the diving business was booming, Harshana said he took a loan of $57,000 in 2017 to convert an old house into a no-frills hostel which earned him $114 a night from tourists in peak season. It is currently closed because he has no bookings.

After letting him postpone loan payments of $630 for both May and June, the bank is giving no such concession for July, he said.

"I have to manage with my savings but I don`t have much. People like us, we rise slowly but the fall is sudden," he said.

The island received 2.5 million foreign tourists last year and with Lonely Planet magazine endorsing it as 2019`s top destination, the government was hoping to draw in more than 3 million this year.

It now hopes to get around 2 million tourists, said Johanne Jayaratne, chairman of the Sri Lanka Tourism Development Authority.

Airlines cancelled 41 weekly flights after the attacks and while carriers like Emirates have resumed their schedule, China Eastern, for instance, is still operating only four flights a week - half of what it used to.

G.W. Ramyasiri, a 57-year-old fisherman who poses for tourists while propped up on a pole in Kogalla lake near Galle, says the government is not providing enough help.

He says he used to make up to $20 in tips from tourists every day before the attacks, now he barely makes a dollar.

He said he has sold the family gold and may not be able to send his younger daughter to university.

"We need money, not loans. If tourists don`t come back, how will I repay the loan?" asked Ramyasiri. "They have actually bombed us and our livelihoods."