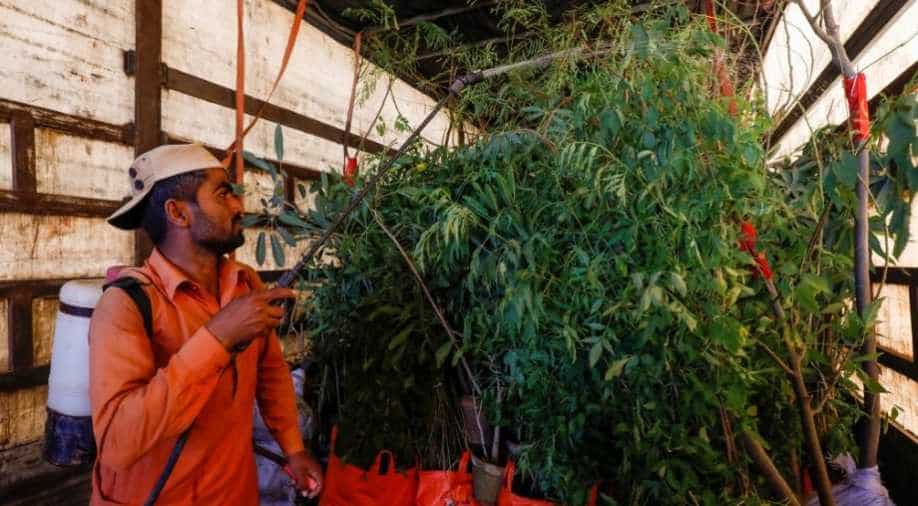 A man sprays water on plants that are to be transported for planting along the pilgrimage route between Iraqi Shia Muslim holy city of Najaf and Karbala, at a farm on the outskirts of Karachi, Pakistan. Photograph:( Reuters )

A retired Pakistani industrialist sent thousands of saplings to Iraq on Friday to bring shade to pilgrims, an idea formed when his relatives returned from a holy site with sunburn.

Millions of people make the pilgrimage every for the religious ritual of Arbaeen, which marks the 40-day mourning period for the grandson of the Prophet Mohammad. They walk most of the way under a baking sun.

Among the worshippers last year were Durbar's grandson and daughter-in-law, who returned to Pakistan tanned and with photographs showing a barren landscape.

"I immediately realised there was no shade," Durbar told Reuters at his farm on the outskirts of the city of Karachi.

Durbar travelled to Iraq, spoke to officials and got permission for his project, and a promise the trees would be cared for. He also planted some trees in Najaf to see if they could thrive there.

The test was a success. "The trees are happy," he said.

A first batch of 9,800 saplings of eight types of trees, up to eight months old, set off from Karachi by truck on Friday, for their journey across Iran to Iraq.

The shipment was delayed about a month because of anti-government protests in Iraq and last minute visa delays.

Durbar says the saplings will be well looked after on their journey with the truck stopping to ensure they get regular sunshine and water.

He is confident they will arrive in good shape and plans to travel back to Iraq to work on the plan.

The trees will spend the winter in a nursery in Baghdad, with the planting due to begin in March.

He said about a dozen people would plant the trees, with the help of small digger he is also sending from Pakistan.

Durbar, a member of the Dawoodi Bohra sect of Shia Islam, estimates it will take three years to plant all of the trees at a cost of 25 million rupees ($160,000), which he is paying.

He is not sure if he will live to see pilgrims walking under his trees, but he knows he has found his calling after a lifetime in industry.

"Partnership with nature is good.”