Myanmar policeman who testified Reuters reporters were framed is sentenced to prison: Police 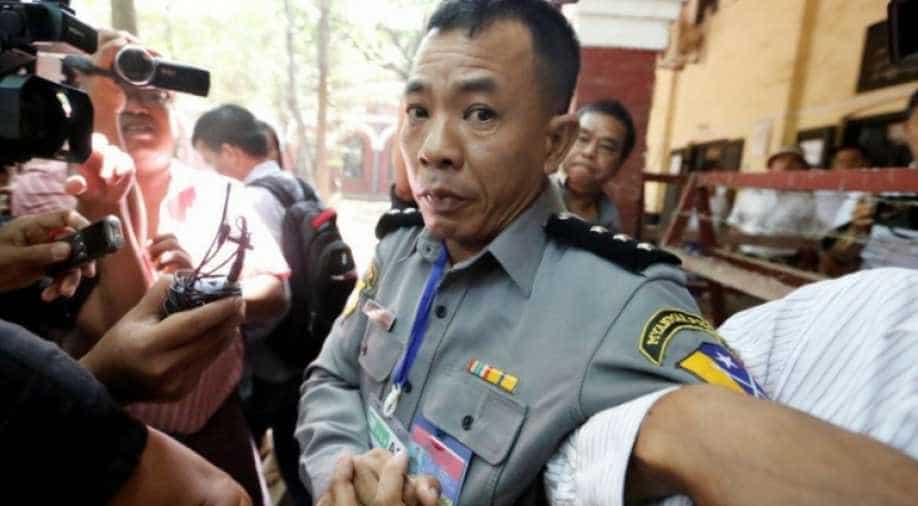 A police officer who testified that police framed two Reuters reporters has been sentenced to an undisclosed prison term for violating Myanmar's Police Disciplinary Act, a police spokesman told Reuters on Sunday, without elaborating.

Captain Moe Yan Naing told the court on April 20 that a senior officer had ordered police to "trap" one of the two journalists arrested in December. He said officers had been told to meet reporter Wa Lone at a restaurant in Yangon and give him "secret documents."

During that hearing, Moe Yan Naing told the court he had been under arrest since the night of December 12, the date the Reuters reporters were arrested, without access to his family. He said he had been accused of violating the Police Disciplinary Act.

The court in Yangon has been holding hearings since January to decide whether Wa Lone, 32, and his Reuters colleague Kyaw Soe Oo, 28, will be charged under the colonial-era Official Secrets Act, which carries a maximum penalty of 14 years in prison.

At the time of their arrest, the reporters had been working on an investigation into the killing of 10 Rohingya Muslim men and boys in a village in western Myanmar’s Rakhine state. The killings took place during an army crackdown that United Nations agencies say has sent nearly 700,000 people fleeing to Bangladesh.

Seven Myanmar soldiers had been sentenced to "10 years in prison with hard labour in a remote area" for participating in the massacre, the Myanmar military said in April.

On Sunday, police spokesman Colonel Myo Thu Soe told Reuters Moe Yan Naing had been punished "according to police disciplinary act," adding that his "case has been processed by a police court, finalised and he was punished and he has been sent to prison to serve the punishment."

Myo Thu Soe did not elaborate on where the police court is based and did not respond to several questions about the specific section of the law under which Moe Yan Naing was sentenced. He also did not answer questions on the length of the sentence.

“The punishment is a prison sentence and for the rest, please find out yourself,” Myo Thu Soe told a Reuters reporter.

Moe Yan Naing told the court he was charged under sections 16 (b) and 22 of the Police Disciplinary Act.

Under section 16 (b), anyone who "neglects to obey any general, local or other order issued in writing" could be sentenced to up to a year in prison.

Section 22 of the act also involves a maximum of a year-long sentence for "any act or omission which, although not specified in this Law, is pre-judicial to good order and police discipline."

Tu Tu, the 42-year-old wife of Moe Yan Naing, told Reuters by phone she had not been notified about a sentence, adding that she has been unable to see her husband since Dec. 12.

"He is in their hand. They can do as they wish," she said, referring to the police.

Tu Tu and her children were evicted from their home in police housing in Myanmar's capital Naypyitaw on April 21 - less than 24 hours after Moe Yan Naing's testimony.

Police have said the eviction order was not related to Moe Yan Naing's testimony, without elaborating further.

Judge Ye Lwin, who is overseeing the pretrial hearings in the case of the Reuters reporters, will on Wednesday rule on whether Moe Yan Naing was credible when he testified about what he called a police "set up" to "trap" Wa Lone.