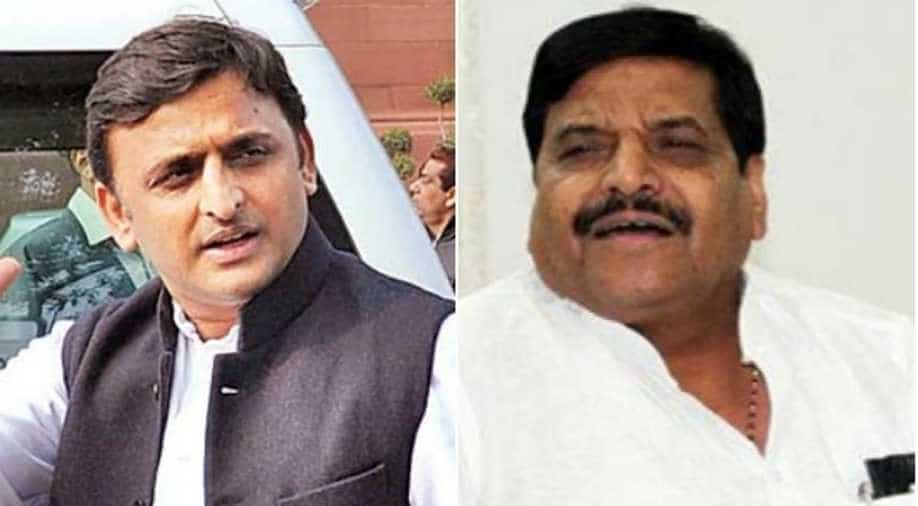 The outcome of the recently concluded Uttar Pradesh Assemble election strengthened Shivpal Yadav?s hand against Akhilesh who was squarely held responsible for the debacle Photograph:( DNA )

Strange things have been happening in the Samajwadi party (SP) in the last seven months, and they have had nothing to do with Socialism on which bedrock the party rests. The sense of calm and placidity which characterised it in the 25 years of its existence, at least in terms of internal cohesiveness, began to be shattered from November onwards last year, with powerful party leader Shivpal Yadav and then Chief Minister Akhilesh Yadav at daggers drawn.

Whatever happens from then on, the Samajwadi party will no longer be the same. The long-term impact of these developments on its electoral fortunes, which have taken a nosedive in recent times, remains to be seen. For now, the picture is not rosy. Consumed by internecine strife, it was drubbed in the Assembly election, and it will soon face the electorate in the urban body polls in this sorry situation.

There is an air of desperation in the two warring camps. The level of surrealism can be understood by the fact that the SP’s defeat actually brought relief to the Shivpal faction. The outcome strengthened Shivpal Yadav’s hand against his nephew who was squarely held responsible for the debacle. But if the senior Yadav was expecting a massive revolt against Akhilesh post-defeat, that didn’t happen.

So, Shivpal Yadav has decided to carry out his threat of floating a new alternative outfit to take on the Akhilesh-led Samajwadi Party — something he had hinted at before the election when he saw organisational power slipping out of his hands. The Samajwadi Secular Morcha is his baby — conceived though yet to be born formally.

But the birth process has run into complications and caused some amount of cheer to the Akhilesh group. Shivpal had confidently announced that the Morcha had the blessings of SP patriarch, his elder brother and Akhilesh’s father Mulayam Singh Yadav. To call Mulayam Singh Yadav the party supremo any longer would be to rub salt into his wounds, given that the Akhilesh camp had ousted him from the national president’s post. But Mulayam was quick to distance himself from the idea, claiming that he had not been consulted and that he would not want the party to split.

It is essentially Mulayam Singh Yadav’s ambivalence that has kept the pot boiling. The veteran politician is caught in multiple dilemmas. He does not want a split in a party he toiled to create and establish as one of Uttar Pradesh’s strongest political outfits and, yet, he is unhappy with the party as it exists today. He also cannot endure the sidelining of his brother Shivpal who has been with him through thick and thin, particularly during the Samajwadi Party’s formative phases. Besides, he feels humiliated over the manner he has been personally dealt with. Yet, he cannot altogether abandon his son, though he has made his preference for Shivpal obvious.

If Shivpal eventually manages to get his elder brother and SP’s tallest leader’s consent, then his Morcha will acquire overnight credibility. Else, it will end up as an amateurish attempt by a disgruntled, even discredited, leader who is out of sync with a ‘young and progressive’ Akhilesh.

The Samajwadi Party has opened itself to all sorts of peculiar situations, and the Morcha attempts to cause damage to the Akhilesh-led party and push him to hand over charge to the old guard. In the run-up to the election, the party had talked of being united, but both the Akhilesh and the Shivpal factions had moved the Election Commission of India for propriety over the ‘Cycle’ symbol, each claiming to be the ‘real’ Samajwadi Party. By all logic, such unity was bizarre. Neither the voters nor the party workers were fooled by the facade of projected wellness.

The two groups were also sharply divided over contesting elections in partnership with the Congress. The Akhilesh camp wanted a tie-up; the Shivpal faction was opposed. The former had its way, with the result that neither Shivpal nor Mulayam campaigned extensively or enthusiastically for the party — and certainly not in constituencies where the Congress had put up its candidates through an arrangement with the SP.

It was clear, as the battle went on, that the real war would be after the result was out. Had the Akhilesh-led SP won, it would have been an end to Shivpal’s ambitions, and the sidelining of his supporters within the party would have been a done deal. But defeat happened, and it emboldened Shivpal. Now, it’s not just Shivpal Yadav’s political future which is at stake; Akhilesh too stares at uncertainty. The party may be defeated but it’s not dead. The new round will determine who will control it.

Shivpal Yadav is an old hand in politics. In tentatively announcing his Morcha, he has cleverly referred to issues that no Samajwadi can possibly disagree with: First, there is the need for a fresh thrust towards ‘secularism’. Second, the Socialist ideals must be protected. Third, it’s incumbent on all Samajwadi elements to work to restore to their leader Mulayam Singh Yadav his ‘lost glory’. The problem is: Just how will the cause of secularism be promoted by a division in the so-called secular forces?

As for fighting for the ideals of Socialism, nobody seriously believes that the present-day Samajwadis are Socialists in the sense that Socialism has evolved over the past three centuries in a structured form. Even Ram Manohar Lohia would find it difficult to identify strands of Socialism in the Samajwadi Party, not to speak of Henri de Saint-Simon who created the term as we understand it today and which was later built upon by the likes of Karl Marx to propound his political theory based on a materialist understanding of socio-economic phenomena.

The Samajwadi Party’s crisis is a godsend for its regional rival: Mayawati and her Bahujan Samaj Party. Reeling under two back to back defeats — in the 2014 Lok Sabha election and the 2017 Assembly poll — the BSP’s hopes now rest on the decline of the SP. It’s not that the SP’s entire vote-bank will shift to the BSP if the former weakens further, but the minority votes will be for its asking in such a situation.

The tantalising question is: If Mulayam Singh Yadav, unable to take sides in the internal feud, recedes into the background, will that make it easier for the SP and the BSP to partner each other to take on Narendra Modi’s Bharatiya Janata Party?