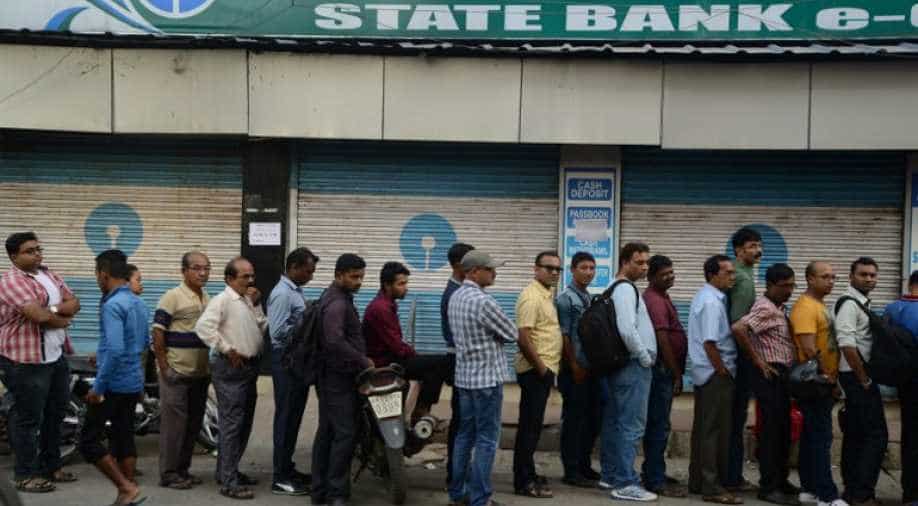 Indian customers queue outside an ATM to withdraw money in Siliguri on November 14. Photograph:( AFP )

With efforts to recover its dues hitting a virtual dead-end, the State Bank of India (SBI) seems to be have started a clean-up of its balance sheets by writing off loans worth about Rs 7,016 crore owed to it by more than 60 of its top 100 wilful defaulters.

While 63 accounts in the list have been fully written off, 31 have been partially written off and six have been shown as non-performing assets (NPAs), reveal documents accessed by DNA. As on June 30, 2016, SBI has written off Rs 48,000 crore worth of bad loans. The documents, however, don't specify the entry time of these "write-offs''.

Information on the bank's clean-up comes a week after the government said it was targeting black money hoarders by demonetizing high-value currency notes, a move that has seen millions queue up outside banks across the country to exchange their money.

Now, loans given to Vijay Mallya's Kingfisher Airlines, which heads the wilful defaulters' list with outstanding dues of almost Rs 1,201 crore, and 62 others will not be shown in the bank's balance sheet.

Following the defunct airlines in the top 20 write-off list are KS Oil (Rs 596 crore), Surya Pharmaceuticals (Rs 526 crore), GET Power (Rs 400 crore) and SAI Info System (Rs 376 crore). Most of these write-off accounts are those of wilful defaulters.

SBI has put all such accounts into AUCA, says its internal report seen by this correspondent. "The main advantage which the bank will have by transfer to AUCA is that banks gross NPAs amount and net additions in NPAs during the quarter will be reduced to the extent of the amount of transfer to AUCA. It will bring down gross advance by the same amount," the reports states.

SBI did not send any reply to several emails and reminders sent by this reporter. Questions sent to top five "write-off" companies also didn't get any reply.

Kingfisher Airlines owes a total of Rs 6,963 crore to 17 banks, of which SBI's loan is Rs 1,201 crore. Recently, an e-auction of Mallya's Kingfisher Villa in Goa failed to find any buyer. Sources said that SBICAP Trustee did not get earnest money deposit (EMD) from even a single bidder.

KS Oil, once a leading edible oil player under the brand names Kalash and Double Sher in the mustard oil segment, turned defaulter and got added to the top 20 list of write-off accounts. KS Oil has allegedly indulged in the diversion of funds from its core business. The company invested huge amounts on plantations in Indonesia and Malaysia but failed to get the expected returns. Though the loan account has been restructured, the company has been unable to revive itself. Lenders have also withdrawn the company from CDR (corporate debt restructure). KS Oil was declared NPA in 2013 with effect from September 30, 2011. As with Kingfisher, the recovery effort was futile as e-auction of five units failed due to lack of bidders.

The third in the list of write-off accounts, Surya Pharmaceutical, was named a wilful defaulter in 2013. The company allegedly indulged in fraud, diversion of funds in retail and education sectors. SBI has symbolic possession of eight properties and is struggling for another in Jammu and Kashmir. A forensic audit from E&Y tagged this a fraud account.

Ajay Kumar Vishnoi's promoted GET Power Ltd was declared wilful defaulter on August 23, 2016. The company's mismanagement and the delay in projects led to trouble for the promoters.

The fifth in the list, Sai Info, has dues of Rs 375 crore and was declared wilful defaulter on August 26, 2016. In June 2013, the company's main promoter Sunil Kakkad absconded but was brought back to India and arrested.

Kakkad is now out on bail. The company has cancelled two high value projects – from the Department of Posts and a Mumbai CCTV surveillance project – worth Rs 2,200 crore. This account has also been declared a fraud. SBI could not get any recovery and could only get symbolic possession of some of the properties.

What are the write-offs?

Banks exercising write-offs is a unique idea to clear bad loan impacts on balance sheets. Banks use the RBI approved tool, Advance Under Collection Accounts (AUCA), in which transfer of accounts to a specific AUCA is an NPA reduction strategy. It is resorted to after exhausting all avenues of recovery, restructuring and compromises. By writing-off bad and doubtful assets, banks can improve NPA ratios through cleansing of the balance sheet and tax benefits. All write-offs, except where one-time settlement or compromises are involved, irrespective of outstanding, should be treated as technical write-offs and parked in AUCA; recovery process of these accounts will continue till resolution of these accounts.