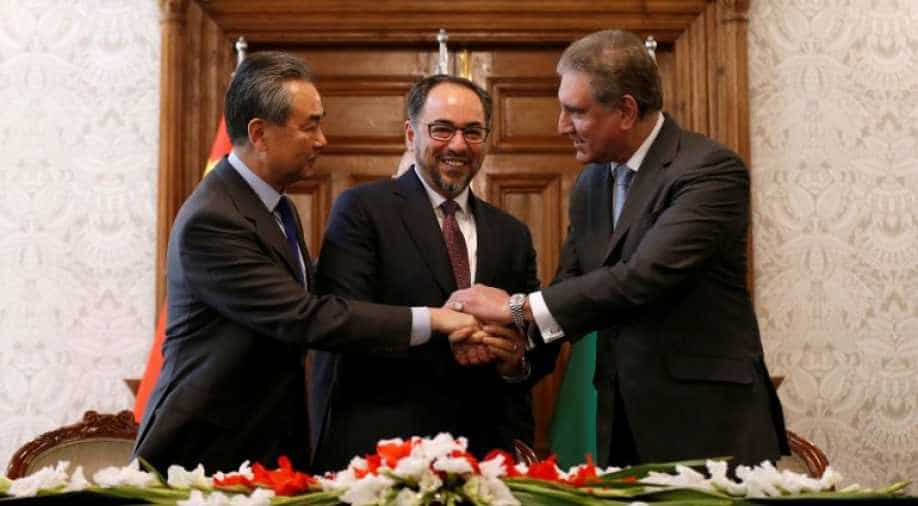 The Chinese government's top diplomat, State Councillor Wang Yi, met the foreign ministers of Afghanistan and Pakistan in Kabul to put into effect a memorandum of understanding on security cooperation and support for Afghanistan's efforts to open talks with the Taliban.

China pledged to help Afghanistan and Pakistan overcome longstanding suspicions, as officials from the three nations met on Saturday in the latest round of diplomacy aimed at opening talks with the Taliban to end the Afghan war.

China, a close ally of Pakistan, has lately deepened its economic and political ties with Kabul and is using its influence to try to bring the two uneasy South Asian neighbours closer, at a time when the United States has sought Pakistan's help with faltering Afghan peace talks.

The Chinese government's top diplomat, State Councillor Wang Yi, met the foreign ministers of Afghanistan and Pakistan in Kabul to put into effect a memorandum of understanding on security cooperation and support for Afghanistan's efforts to open talks with the Taliban.

"China approves of this, and is willing to provide support and help for Pakistan and Afghanistan to improve their ties," Wang told reporters after the meeting.

The meeting, which followed initial talks between the three countries a year ago, is the latest sign of China's increasing engagement in the region, where it has invested massively in the China–Pakistan Economic Corridor (CPEC), a central part of its global Belt and Road initiative.

However, they have opened contacts with the United States to prepare for possible talks to end a war that has killed and maimed tens of thousands in the 17 years since a US-backed campaign overthrew the Taliban in 2001.

Afghan President Ashraf Ghani recently formed a 12-strong team to negotiate with the Taliban, but has said any deal could take at least five years to implement.

"We support Afghanistan and Pakistan efforts for peace and we call on the Taliban to join the peace process," said Wang, adding that both countries have agreed to resolve disputes through "friendly consultations."

Political tensions, coupled with allegations that security agencies in both countries support militant groups that bring deadly attacks against one another continue to strain relations between Kabul and Islamabad.

"By blaming, no one moves ahead, we have to stop pointing fingers at each other that why I am here to build mutual political trusts and facilitate the peace process of Afghanistan," he said.

Earlier this month US President Donald Trump requested Pakistan's support for the US effort to advance the Afghan peace process.

The officials also signed agreements to enable the expansion of CPEC to Afghanistan through road and rail links.