Rescued baby elephant nursed back to health at Myanmar sanctuary 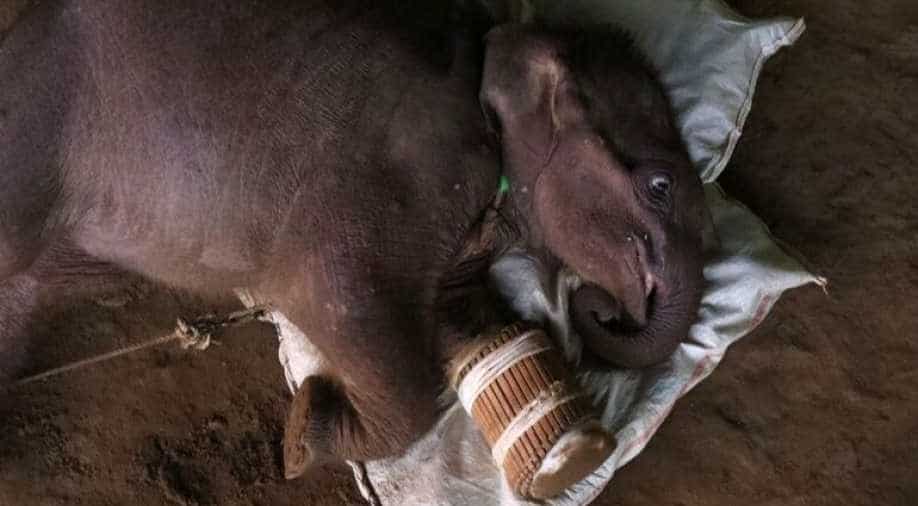 The four-month-old calf was rescued from a hunter's snare trap in the forest of Myanmar's southwest Ayeyarwaddy region last month.

Baby elephant Ayeyar Sein trumpets impatiently as a vet prepares her milk bottle and walks cautiously, her front left leg in a splint made of bamboo and cloth bandages.

The four-month-old calf was rescued from a hunter's snare trap in the forest of Myanmar's southwest Ayeyarwaddy region last month and is now being looked after by staff at the Wingabaw elephant sanctuary, an hour's drive northeast of Yangon.

"When she arrived at the camp last month, her leg was terribly sore", said Than Naing Oo, the camp veterinarian, as he cleaned the injury.

"Now she is getting better as we treat her with medicine twice a day."

Than Naing Oo said Ayeyar Sein's parents were nowhere to be seen near the trap and were most likely killed by poachers.

Poachers kill elephants for their tusks and skin, which are used to make jewellery and traditional medicine, among other things.

"The big challenge for us in taking care of baby elephants is to keep them alive", said Shwe Yi Win Htet, manager at the camp, adding that two young elephants had died in their care.

"They do not have mothers to feed them and are instead fed with powdered milk. That's why all of us are looking after them very carefully. Our priority is to prolong their lives", she said.

Officials named the four-month-old calf Ayeyar Sein in accordance with the tradition of giving orphans the first name of the state where they are found.

Wingabaw elephant camp is a government-owned shelter and 20 elephants rescued from similar situations are currently kept there.

Ayeyar Sein will be raised with the other orphans in the camp after her injury has healed.

There are about 1,400 to 2,000 elephants left in the wild in Myanmar, while 5,000 are in captivity, according to a 2018 Smithsonian Conservation Biology Institute report, which highlights elephant poaching as an emerging crisis in the Southeast Asian country.