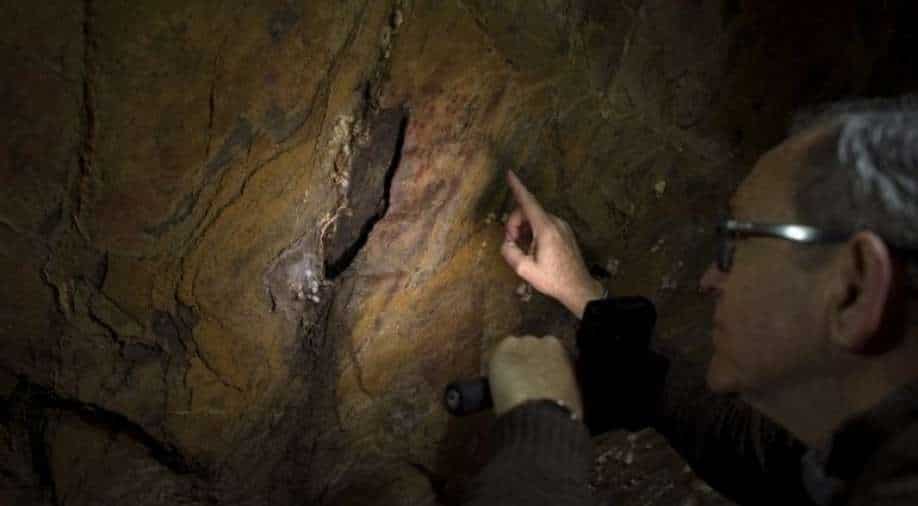 Pedro Cantalejo, director of the Andalusian cave of Ardales, looks at neanderthal cave-paintings inside the cavern Photograph:( AFP )

The discovery is shocking because neanderthals have been perceived as unsophisticated and brutish but painting caves more than 60,000 years ago is an incredible feat for them to achieve

Scientists have discovered Neanderthals were painting stalagmites in Europe at a time when modern humans did not inhabit the continent.

The discovery is shocking because neanderthals have been perceived as unsophisticated and brutish but painting caves more than 60,000 years ago is an incredible feat for them to achieve.

The cave-paintings found in three caves in Spain, one of them in Ardales, were created between 43,000 and 65,000 years ago, 20,000 years before modern humans arrived in Europe, what could confirm that art was invented by the Neanderthals some 65,000 years ago.

However, according to Francesco d'Errico, co-author of a new paper in the journal PNAS, the finding was contentious, and "a scientific article said that perhaps these pigments were a natural thing," a result of iron oxide flow.

What's more, their texture did not match natural samples taken from the caves, suggesting the pigments came from an external source.

More detailed dating showed that the pigments were applied at different points in time, separated by more than ten thousand years.

This "supports the hypothesis that the Neanderthals came on several occasions, over several thousand years, to mark the cave with pigments," said d'Errico, of the University of Bordeaux.

It is difficult to compare the Neanderthal "art" to wall paintings made by prehistoric modern humans, such as those found in the Chauvet-Pont d'Arc cave of France, more than 30,000 years old.

But the new finding adds to increasing evidence that Neanderthals, whose lineage went extinct around 40,000 years ago, were not the boorish relatives of Homo sapiens they were long portrayed to be.

The team wrote that the pigments are not "art" in the narrow sense of the word "but rather the result of graphic behaviors intent on perpetuating the symbolic significance of a space."

The cave formations "played a fundamental role in the symbolic systems of some Neanderthal communities," though what those symbols meant remains a mystery for now.