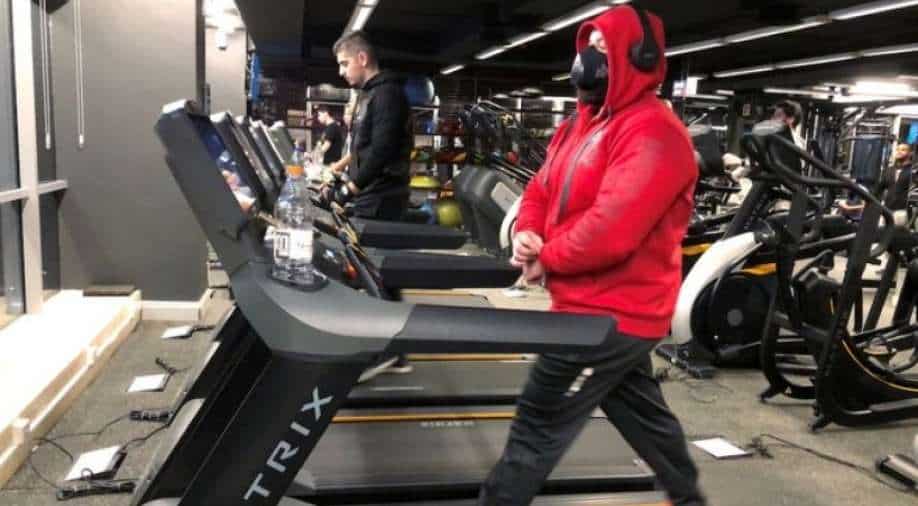 Researchers at CDC advised fitness centers to take a variety of measures to prevent outbreaks, including enforcing proper mask use

Public health officials on Wednesday urged gymgoers to wear masks when they work out and to remain 6 feet apart, as new research described the rapid spread of coronavirus infections during high-intensity exercise classes at gyms in Honolulu and Chicago.

Researchers at the Centers for Disease Control and Prevention advised fitness centers to take a variety of measures to prevent outbreaks, including enforcing proper mask use and reminding gym and staff members to stay home if they have symptoms of illness or have tested positive for the virus.

“It’s very important for individuals who would like to attend a gym and work out to be cognizant of what the COVID symptoms are, and to be aware that if you are feeling something that looks and feels like a COVID-19 symptom, to stay home as a precaution,” said Richard A. Teran, a CDC public health researcher in Chicago who was one of the authors of the Chicago case study published Wednesday.

At a gym in Chicago, Teran and his colleagues identified 55 coronavirus infections among 81 people who attended high-intensity, in-person fitness classes between Aug. 24 and Sept 1.

Among them were 22 people who had gone to the classes on the day they developed their first symptoms of illness, or the day after. Three went to an exercise class on the day they received a positive test result indicating they had been infected, or the day after. In all, 43 gym members who tested positive participated in classes when they were possibly infectious, researchers said.

The outbreak occurred even though classes at the gym were limited to 25% of their usual size, with only 10 to 15 people in attendance.

Members were required to wear masks when they entered the gym, at which point they had their temperatures taken and were screened for symptoms. But they were allowed to remove their masks while exercising; those who were infected were more likely to wear masks only infrequently during classes, the researchers found.

In Hawaii, public health investigators linked 21 infections to a 37-year-old male fitness instructor in Honolulu who taught at several facilities and developed symptoms of COVID-19 — body aches, chills, headache and cough — at the end of June, according to a CDC report published Wednesday.

On June 29, just hours before his first symptoms, he taught an hourlong stationary cycling class with 10 participants, in which no one wore a mask. All of those participants tested positive in early July, among them a 46-year-old man who worked as a fitness instructor at another facility. He became acutely ill and was hospitalized in an intensive care unit.

Twelve hours before that instructor experienced his first symptoms, he held several small kickboxing sessions and a personal training session. Of 11 people exposed, 10 became infected and tested positive in early July. All 10 developed COVID symptoms, and one was hospitalized in the ICU.

On July 22, the city of Honolulu passed emergency orders requiring face coverings in fitness centers, including during exercise. Before then, gym members could remove their face coverings while exercising.

Fitness centers and gyms have been hit hard since last March, when the pandemic struck. They were among the first businesses shuttered last spring, and now they are eager to welcome patrons back.

The International Health Racquet and Sportsclub Association, an industry group, reported recently that 15% of the nation’s clubs and studios had closed as of last fall, and more closures and bankruptcies were expected. The association has been encouraging people to return to gyms, adopting the slogan “Exercise is vital!”

The outbreaks described in the CDC studies were caused by inconsistent mask use and other lapses in behavior, and perhaps buildings that were inadequately ventilated, she said.

“In Chicago, you had members who went to class when they were symptomatic or COVID-positive,” Larcom said. That facility was not originally designed to be a fitness center, she added, and the screening for symptoms appeared to have been poorly carried out.

“Society-wide, we are relying on people who are sick or think they are sick to remove themselves from society,” she said. Those who went to the gym even though they had symptoms “were probably also going to the grocery store, going out to eat and moving through the community.”

The CDC researchers emphasized that a multifaceted approach to safety is required in fitness facilities, including good ventilation, consistent and correct mask use, persistent reminders that employees and patrons are to stay home when sick, and additional hand washing stations.

“Nothing is 100% safe,” Larcom said. “There is never zero risk. But clubs are not the primary driver of COVID spread.”