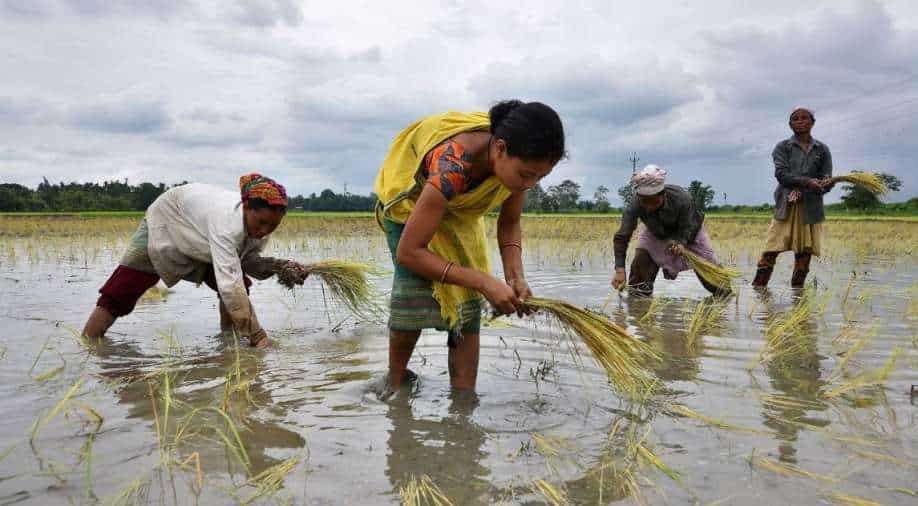 Women plant rice saplings at a paddy field in a village in Nagaon district, in the northeastern state of Assam, India Photograph:( Reuters )

The purchases highlight tightening supplies in Asia, which could lift rice prices in 2021 and even force traditional buyers of rice from Thailand and Vietnam to switch to India, the world's biggest exporter of the grain

Vietnam, the world's third biggest exporter of rice, has started buying the grain from rival India for the first time in decades after local prices jumped to their highest in nine years amid limited domestic supplies, four industry officials told Reuters.

The purchases highlight tightening supplies in Asia, which could lift rice prices in 2021 and even force traditional buyers of rice from Thailand and Vietnam to switch to India, the world's biggest exporter of the grain.

Indian traders have been contracted to export 70,000 tonnes of 100 per cent broken rice for January and February shipments at around $310 per tonne on a free-on-board (FOB) basis, the industry officials say.

"For the first time we are exporting to Vietnam," B.V. Krishna Rao, president of the Rice Exporters Association, told Reuters on Monday. "Indian prices are very attractive. The huge price difference is making exports possible."

The shrinking supplies will heighten concerns about food insecurity with sub-Saharan Africa among the areas where import demand has been increasing due partly to population growth.

Chronic and acute hunger is on the rise, impacting vulnerable households in almost every country, with the COVID-19 pandemic reducing incomes and disrupting supply chains, according to the World Bank.

Traders said the global pandemic has also prompted Vietnam and other countries to stockpile rice.

Traders in Vietnam said the rice from India had been stockpiled in government reserves since 2016/17 and its relatively cheap price reflected low quality.

"The rice quality is so poor that it is not good for direct consumption for humans, but only for producing animal feeds and beer," said a rice trader based in Ho Chi Minh City.

Robust demand from Asian and African countries has also been lifting Indian prices but they are still very competitive due to ample stocks, said Nitin Gupta, vice president of Olam India's rice business.

In December, the world's biggest rice importer China started buying Indian rice for the first time in at least three decades due to tightening supplies from Thailand, Myanmar and Vietnam and an offer of sharply discounted prices.

In 2020 India exported a record 14 million tonnes of rice, provisional data from the trade ministry showed.