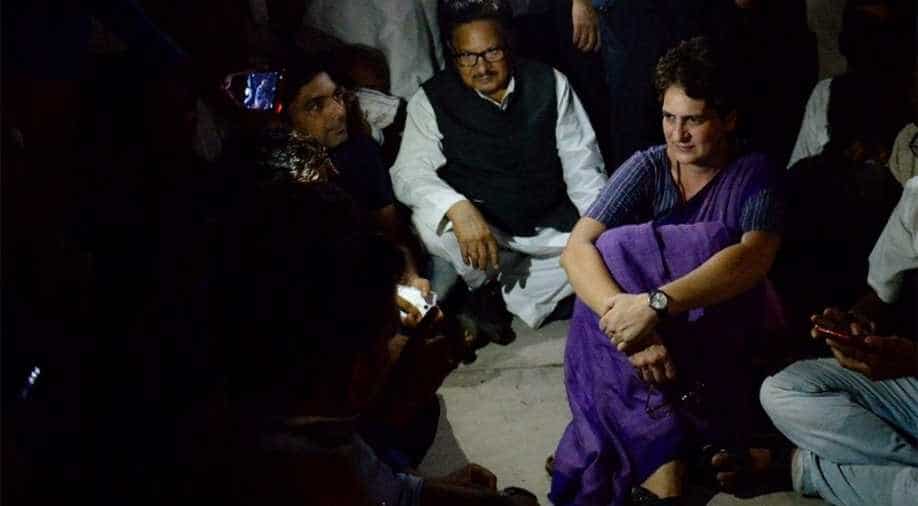 'If the government wants to put me in jail for meeting the victims, I am fully prepared,' she said on Twitter.

Congress leader Priyanka Gandhi Vadra spent a night at a guest house in Uttar Pradesh's Mirzapur after she was detained while on her way to Sonbhadra to meet July 17 firing victims.

On Friday, Priyanka Gandhi was stopped in Narayanpur by police and spent the night at Chunar Guest House.

According to a report by ANI, senior officials from the district administration met Priyanka Gandhi and tried to send her back to Varanasi but standing firm on her stand she told the officials that she won't leave without meeting the families of the victims.

"If the government wants to put me in jail for meeting the victims, I am fully prepared," she said on Twitter.

Further, she also said, "I will not furnish the bail amount; I will not pay a single penny. I had said if Section 144 is imposed in Sonbhadra, I won't violate it, 2 people will go. But the action was taken. I have been kept here for the last 7 hours. I would not move without meeting them."

The guest house where Priyanka had a power outage till late about 10 pm. Late at night, Congress party workers collected money and brought a generator on rent to ensure uninterrupted power supply at the guest house.

"The Uttar Pradesh government has sent ADG Varanasi Brij Bhushan, Commissioner Varanasi Deepak Agarwal, Commissioner Mirzapur, DIG Mirzapur for asking me to leave without meeting the victim families. They all are sitting with me for the last 1 hour. They have neither given any base nor any papers for keeping me under arrest," Priyanka informed on Twitter.

Outside Priyanka's room, police personnel maintained tight security vigil throughout the night while Congress workers slept on the floor, a little distance away.

The party workers staging sit-in with her have maintained that the fight will continue till she is allowed to go and meet the victims of Sonbhadra firing incident.

The Sonbhadra firing incident took place in Ubbha village of Ghorawal where the village head went to take possession of his land purchased two years ago.

However, he met with opposition from the villagers which triggered the firing allegedly by his aides leading to the deaths.