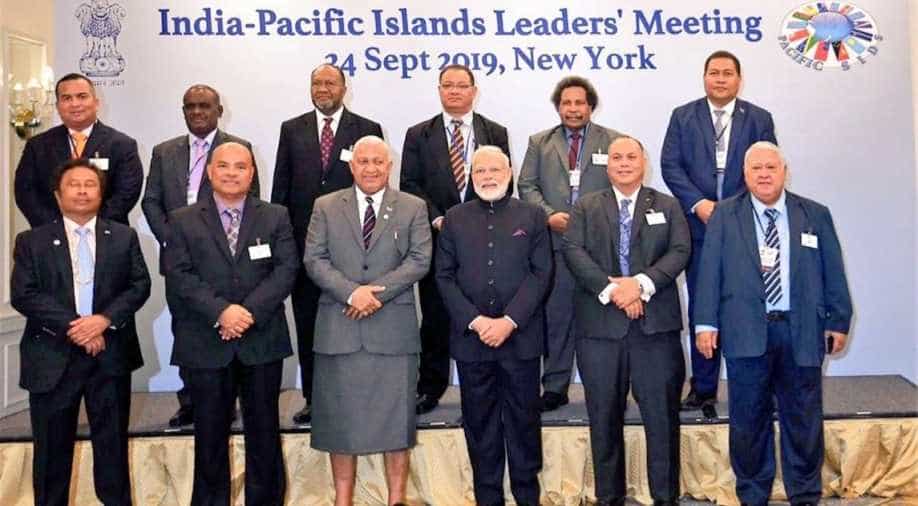 Prime Minister Narendra Modi on Tuesday (local time) said that all Pacific Island member states play an "important" role in each other's development while adding that New Delhi will work to take the strategic partnership between the countries to new heights.

Addressing the India-Pacific Islands Leaders' Meeting in New York, the Prime Minister said, "It is a matter of happiness that this meet has been organised. India has friendly relations with all, we are important partners in each others` development. I welcome all the leaders and delegations."

"We`ll take the strategic partnership to new heights and looking forward to strengthening it," he added.

The India-Pacific Islands Leaders' Meeting takes place on the sidelines of the 74th session of the UN General Assembly.

It is first of the two plurilateral meets which are scheduled to take place during Modi`s week-long official visit to the United States.

Modi has participated in a string of events, including addressing the mega Howdy Modi! event in Houston, the UN Climate Action Summit in New York and a high-level meeting on the health sector.

He has also held bilaterals with the USA, Italy, Niger and Qatar and met leaders from Bhutan, Germany and Netherlands -- to name a few -- on the sidelines of his UN engagements.

The Prime Minister also held a series of pull-asides with countries like Jordan, Indonesia and Luxembourg on Monday.

Modi is scheduled to address the UN General Assembly session on Friday.