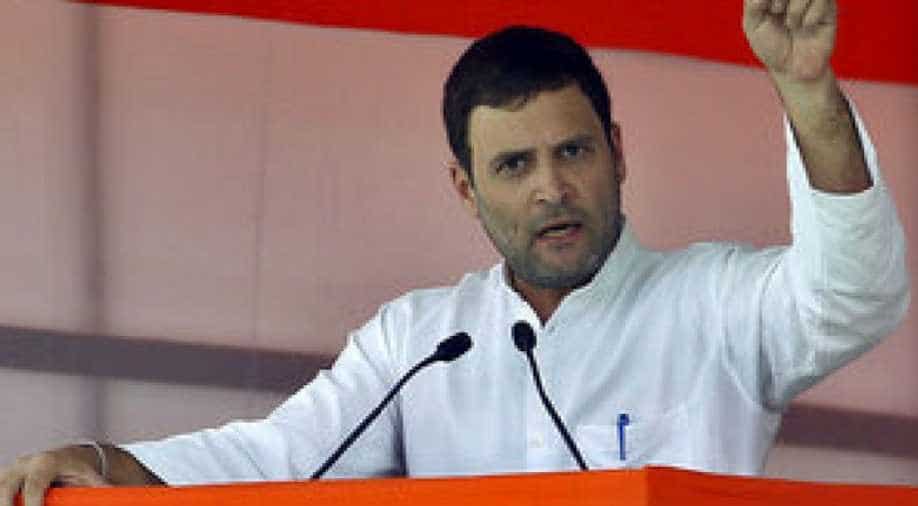 Gandhi interacted with industry representatives and workers at Nirman Industries? loom factory in Katargam industrial development area after he arrived in the Surat city of the poll-bound Gujarat. Photograph:( PTI )

Lashing out at the Centre, Congress vice president Rahul Gandhi on Wednesday said note ban and GST rollout have broken the legs of Surat as he observed a “black day” in the country’s textile and diamond hub.

Gandhi interacted with industry representatives and workers at Nirman Industries’ loom factory in Katargam industrial development area after he arrived in the Surat city of the poll-bound Gujarat.

“There was an attack on India’s economy one year back,” he said.

“I interacted with the people here and they told me that notebandi (demonetisation) and then GST have broken Surat’s legs. The industry has been finished by the twin blows not only here, but in the entire country,” Gandhi said.

“The people said that they have been threatened. But truth cannot be suppressed, it will come out,” the Congress leader told reporters.

He said, “Surat is the place which can compete with China and has been doing it. Jobs will either come to India or China. But instead of helping them, the government has destroyed their strength.”

Hitting out at the new tax regime rolled out by the NDA government on July 1 this year, Gandhi said, “We had told (Prime Minister) Narendra Modiji and (Union Finance Minister) Arun Jaitleyji not to implement the GST in this way.”

He said, “This is not a political thing, this is not between the Congress and the BJP. This is about India’s competitiveness, we have to compete with China. You please do not kill our industries and businesses. But they said that we are going to implement it at 12 midnight,” he said.

“You press (media) people were asking us, why we are not allowing GST to be implemented, because we wanted to save Surat and the country,” he said.

“GST means one nation, one tax. But this GST, implemented by Modiji, which has five layers will not work. We had said that maximum cap on taxes should be 18 per cent but they did not listen to us,” the Congress leader said.

Gandhi is expected to have a formal interaction with traders in Adajan area of the city this evening.

He is also likely to participate in a candle light vigil, to mark the “black day”, near Vivekanand statue in Chowk Bazar area of Surat.

The prime minister had announced demonetisation of Rs 1,000 and Rs 500 notes as a measure to fight black money, corruption, fake currency and terror funding on this day last year.

The opposition is observing a “black day” today.