Modi made money disappear from Gujarat through magic: Rahul 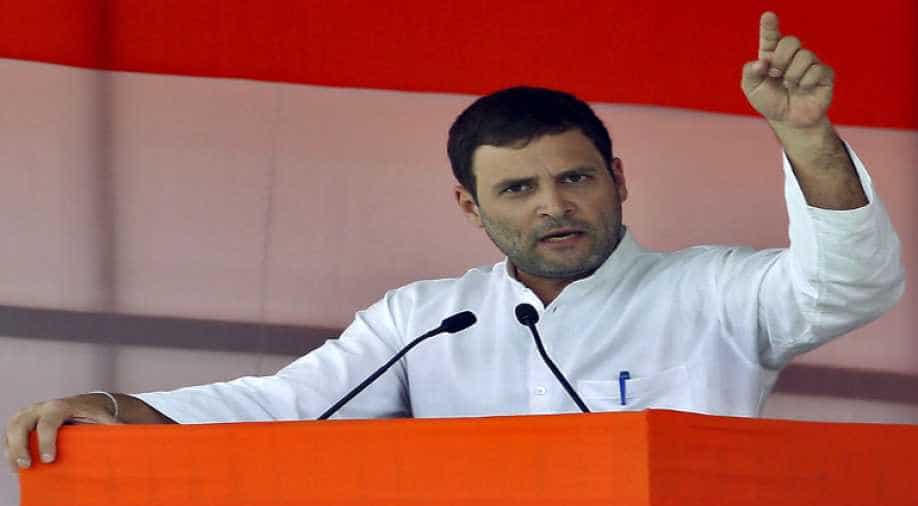 "....Narendra Modi did magic in Gujarat for 22 years like you did. The difference is that you produced money but Modiji made it disappear," Gandhi told the gathering after the performance got over. Photograph:( ANI )

Congress vice-president Rahul Gandhi on Monday alleged that Narendra Modi made money "disappear" from Gujarat through "magic" in the last two decades of the BJP rule, as he stepped up his attack on the Prime Minister in the poll-bound state.

Gandhi's jibe at Modi came after a man met him during an interaction with members of the notified and denotified tribes in Harij village in the district and lamented that he was once a snake charmer and now makes a living by performing magic.

Gandhi then asked him to perform some tricks and the man obliged. During his brief performance, the man produced some money through tricks.

"....Narendra Modi did magic in Gujarat for 22 years like you did. The difference is that you produced money but Modiji made it disappear," Gandhi told the gathering after the performance got over.

He assured the members that their problems and difficulties will be considered by the party.

He asked the members to send a delegation to the manifesto committee and apprise them about their issues.

"Tell them what do you want exactly. We will listen to your delegation and we will include your demands in our manifesto," Gandhi said.

"This charge (against Rupani) is not levelled by media. The body which controls the stock markets says that your chief minister is 'beimaan' (dishonest). They have fined him," Gandhi said.

He also raked up allegations of profiteering against the firm of BJP president Amit Shah's son Jay.

"No businessmen, howsoever clever, can make Rs 80 crore from Rs 50,000 in a span of few months. But it happened in the company owned by Amit Shah's son after the BJP came to power in 2014," he said.

Referring to Modi's promise that he won't let corruption thrive under him, Gandhi said the country wants to listen what the Prime Minister has to say about Rupani or Jay Shah's dealings.

"Modiji used to say 'Na Khaunga, Na Khane Dunga'. People of the country want to listen what you (Modi) have to say about the company of Amit Shah's son and on Vijay Rupani. People of Gujarat will believe that you are not 'chowkidar' (watchman) but 'bhagidar' (collaborator) if you don't say anything on these issues," he said.

The Securities and Exchange Board of India (SEBI) has reportedly fined 22 entities, including Rupani's HUF (Hindu Undivided Family), for alleged manipulative trading in the shares of a company, Saran Chemicals Ltd, during the January- June 2011 period.

Rupani has said that the SEBI set aside the fine of Rs 6.91 crore imposed on 22 entities, including his firm.

He visited Rani Ki Vav, a UNESCO world heritage site in Patan, and a cotton growing farm to inquire how cotton is grown.

During his interaction with a group of Dalits in Patan, Gandhi assured them of implementing all the promises made in the Congress's manifesto.

He also termed the RSS, the BJP's ideological mentor, as a "manuvadi institute".