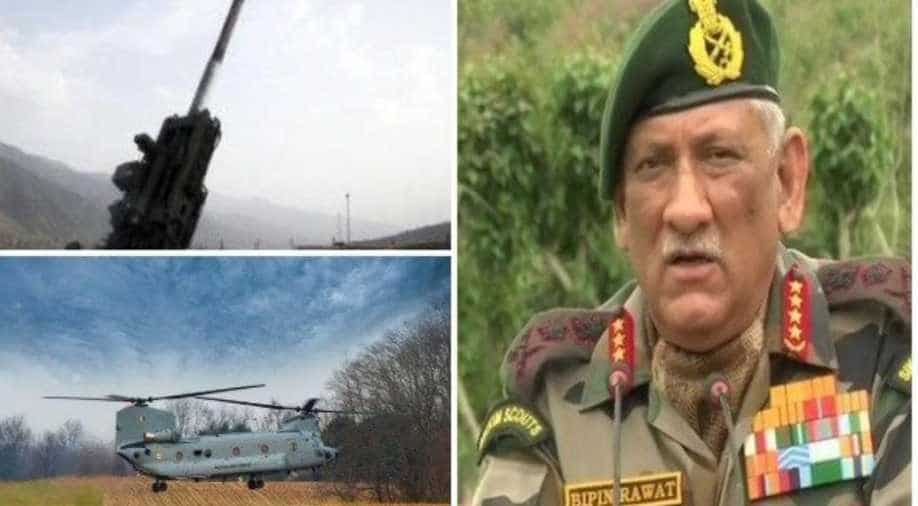 Codenamed HimVijay, this exercise planned by India in the northeast will mainly test the war fighting abilities of the newly-raised 17 Mountain Strike Corps in Arunachal Pradesh.

Indian Armed Forces are planning to deploy their latest American weapons systems including M777 ultra-light howitzers and Chinook heavy-lift helicopters in the war games to be carried out in Arunachal Pradesh, close to borders with China.

Codenamed HimVijay, this exercise planned by India in the northeast will mainly test the war fighting abilities of the newly-raised 17 Mountain Strike Corps in Arunachal Pradesh.

The exercise will also involve the Indian Air Force (IAF) which would provide the aerial elements for the real war-type drills.

"During the exercise HimVijay, the 17 Mountain Strike Corps has been provided with the M777 Ultra Light Howitzers as they would be in an attack mode against the `enemy` locations and would require the lighter guns," senior Army sources told ANI.

Another recently inducted American system planned to be utilised during the war games would be the Chinook heavy-lift choppers.

These choppers were formally inducted into the Air Force on March 25 at the Chandigarh airbase.

"The Chinooks are not yet inducted into the northeast by the Air Force but at some point of time in the near future, they plan to induct it in that region. So, they have been requested to utilise the helicopters during the wargames," they said.

The war games have been planned by the Eastern Command for the last six months and are being implemented by the Panagarh-based 17 Strike Corps and the Tezpur-based 4 Corps.

The M777 ultra-light howitzers were inducted into the Indian Army along with the K-9 Vajra and Dhanush howitzers at Deolali near Nashik.

The Indian Army will induct a total of 145 M777 howitzers in service. The M777 Howitzers are planned to be used mainly for warfare in mountainous terrains only due to their lightweight and ability to be airdropped by the Chinook heavy-lift helicopters in the high altitude areas in the Ladakh and Arunachal Pradesh.

More than 5,000 troops of the Indian Army`s only Mountain Strike Corps will carry out a massive war game to practice real war-like situation on the eastern front of the country.

"As part of the war games, the troops of the Tezpur-based 4 Corps will be deployed at a high altitude location to defend their `territory` while a brigade-sized force (over 2,500 troops) of the 17 Mountain Strike Corps would be airlifted by the Indian Air Force to `launch an offensive` against them," sources said.

The Indian Air Force will airlift the troops using its latest transport aircraft including the C-17, C-130J Super Hercules and the AN-32 to airlift the army troops from Baghdogra in West Bengal and deploy them close to the `war zone` in Arunachal Pradesh, they said.

To make the 17 Mountain Strike Corps more effective during wartime in the mountainous region with China, the fighting formations under it are being converted into Integrated Battle Groups (IBGs) as part of Army Chief Gen Bipin Rawat`s restructuring process.

Once the IBGs are formed, the formations will be converted into leaner and more efficient fighting units with the ability to strike deeper and faster against enemy targets, the sources said.

An IBG, which will be a little smaller than a division, will integrate the existing elements of infantry, tank regiments, artillery, engineers and signals.

It will comprise six battalions of these elements and will be directly under a Corps.