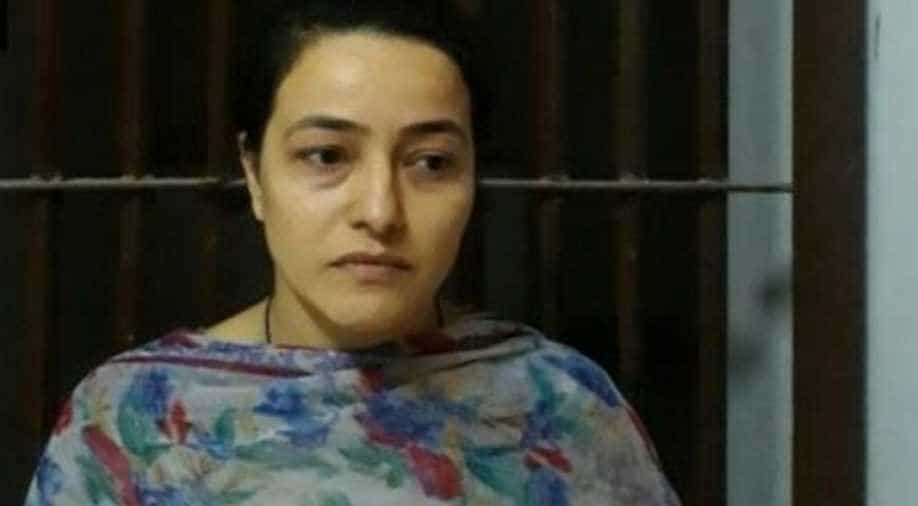 Honeypreet is accused of having instigated the violence that broke out after her 'adoptive father's' conviction for rape on August 25. Over 35 people died in the violence. Photograph:( ANI )

A Panchkula court today remanded Honeypreet Insan in judicial custody till October 23 in connection with the violence that followed the Dera Sacha Sauda sect chief's rape conviction on August 25.

After the completion of nine-day police remand, Honeypreet, who calls herself the adopted daughter of Dera chief Gurmeet Ram Rahim Singh, and Sukhdeep Kaur were presented before the court of Chief Judicial Magistrate Rohit Watts under tight security arrangements.

"Both Honeypreet and Sukhdeep have been remanded in judicial custody till October 23," defence counsel S K Garg Narwana said.

They will be lodged in Ambala central jail and will be produced before the court through video-conferencing on October 23, he said.

After their arrest, the court had first remanded both of them in police custody for six days and later extended their remand for another three days which ended today.

The prosecution told the court that they had recovered a mobile of Priyanka Taneja (36), alias Honeypreet.

The prosecution also told the court that Honeypreet had provided incriminating evidence in the case.

Honeypreet, along with Sukhdeep Kaur, was arrested from Zirakpur-Patiala road in Punjab on October 3.

Honeypreet topped a list of 43 people "wanted" by the state police in connection with the violence.

Haryana Police had on September 1 issued a look-out notice against Honeypreet and another key aide of the Dera chief, Aditya Insan, following apprehensions that they might try to "escape from the country".

Her name has been included in a FIR in which Dera functionaries Aditya Insan and Surinder Dhiman, among others, had been booked on the charge of sedition, inciting violence and arson, the police had said earlier.

Following the conviction of the Dera chief, violence had erupted in Panchkula and Sirsa, the Dera headquarters, which claimed 41 lives and left scores of people injured.

The Dera chief has been sentenced to 20 years in jail for raping two women and is now lodged in jail.