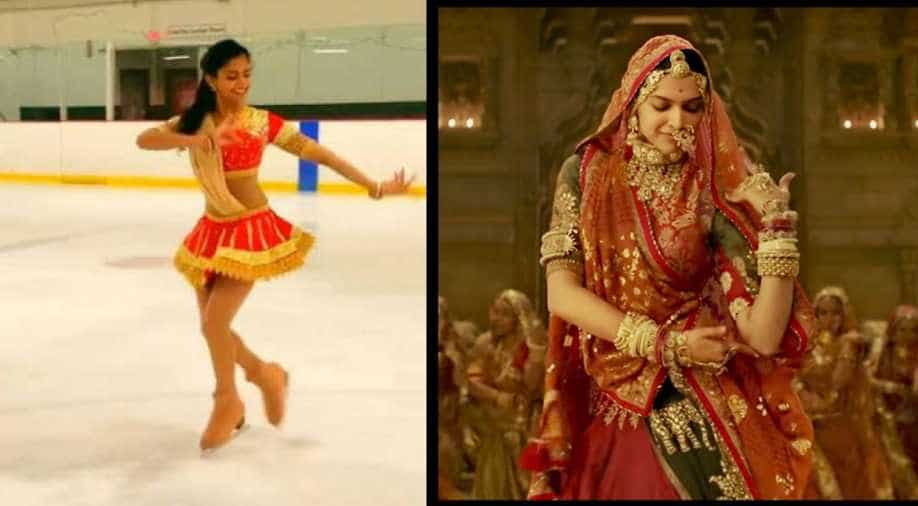 Mayuri Bhandari performs 'Ghoomar on Ice' in honour of song from Padmaavat. (Source: YouTube) Photograph:( Others )

Sanjay Leela Bhansali's Padmaavat released on January 25 and has ever since raked in more than Rs 150 crore at the box office. The film has become such a hit among US and UK audiences, that women in San Francisco even dressed up like Deepika's character in the film to go watch the movie in theatres.

While the movie has been in news for all the good and bad reasons alike, the song Ghoomar from the film has earned its own fair share of mixed reactions -- starting from Karni Sena's objection to Deepika's bare midriff in the song to NBA cheerleaders performing the song at halftime in a match.

Now, figure skating champion Mayuri Bhandari has taken the song to another level. She performed the song while skating on ice and created her own version of dance sequences.

Titled 'Ghoomar Dance on Ice', Mayuri's video on YouTube shows her twirling to the track on an ice rink. Wearing ice skates and a red costume, Mayuri is seen dancing effortlessly to Ghoomar in the video.

She captioned the video: "In honour of the film Padmaavat's release, here is my ice skating tribute to the beautiful song Ghoomar! As a Rajasthani, I skate to this song with pride!"

Recently, actress Swara Bhaskar raised objections on the portrayal of Jauhar scene in the film which looked like the glorification of the banned practice.