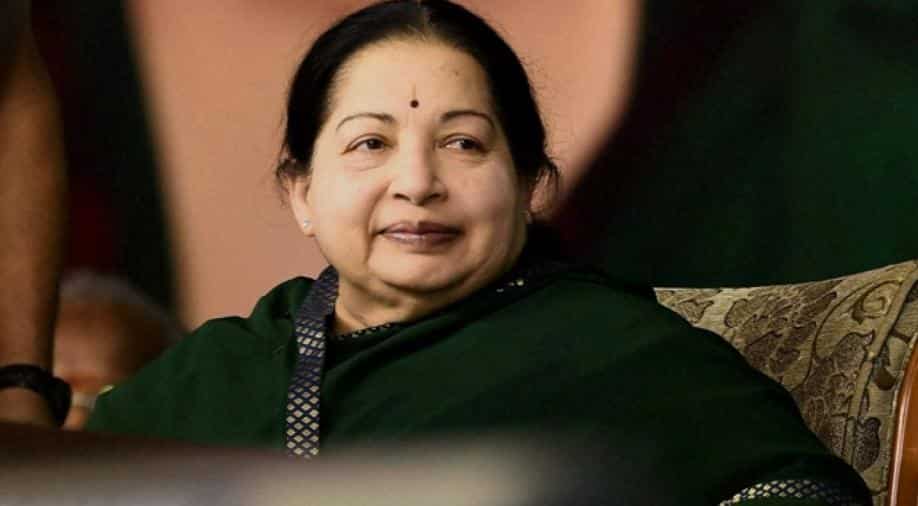 Later, they flagged off a propaganda van aimed at reaching out to the people with the "achievements of the AIADMK and the state government".

A photograph of Jayalalithaa with Prime Minister Narendra Modi (taken when she presented a memorandum to him years ago) was displayed, for the first time in the AIADMK headquarters premises, which already has a host of her photos, besides that of party founder M G Ramachandran.

When contacted, a party office executive said the photograph was among several other pictures put up for the Amma's anniversary celebrations.

It was put up in an effort to highlight the personality of Amma, who had friendly ties with leaders across the political spectrum, he said.

"The premises were decorated with photos of Amma with great leaders, including Anna (Dravidian icon), Thanthai Periyar (reformist leader), former Prime Minister Indira Gandhi and Mother Teresa," he told PTI, adding that Modi's photograph was one among them.

The photographs were displayed by the literary wing, coinciding with the 'Annadhanam,' (community feast) event at the headquarters premises for the anniversary, he added.

Panneerselvam and Palaniswami, the AIADMK coordinator and co-coordinator, garlanded a statue of Jayalalithaa at the party office, distributed sweets and released a souvenir marking the occasion.

Modi, whose party has entered into a pact with the AIADMK for the upcoming Lok Sabha polls, in a tweet said: "Tributes to Jayalalithaa Ji on her birth anniversary. Her contribution towards the development of Tamil Nadu will be remembered for generations.

Shah tweeted, "...Her passion and commitment to serve the poor and marginalised shaped millions of lives in Tamil Nadu. She will continue to be fondly remembered as Amma for generations."

Union minister Piyush Goyal, in a message, described Jayalalithaa as "the most respected and beloved Amma".

"Dr J. Jayalalithaa ji was someone I respect and someone whose radiant smiling face comes before my eyes as I talk to you," he tweeted after participating in a function here.

A medical camp was held at the AIADMK headquarters, where diagnostic equipment were also brought in to detect heart ailments.

The party office wore a festive look and the premises were decked up with flowers and festoons.

The AIADMK praesidium chairman was given a sports utility vehicle by the party on the occasion for party work, a release said.

In neighbouring Puducherry, the local unit of the AIADMK celebrated the birth anniversary of the late leader by distributing welfare assistance among people.

Jayalalithaa passed away on December 5, 2016 after a prolonged illness.