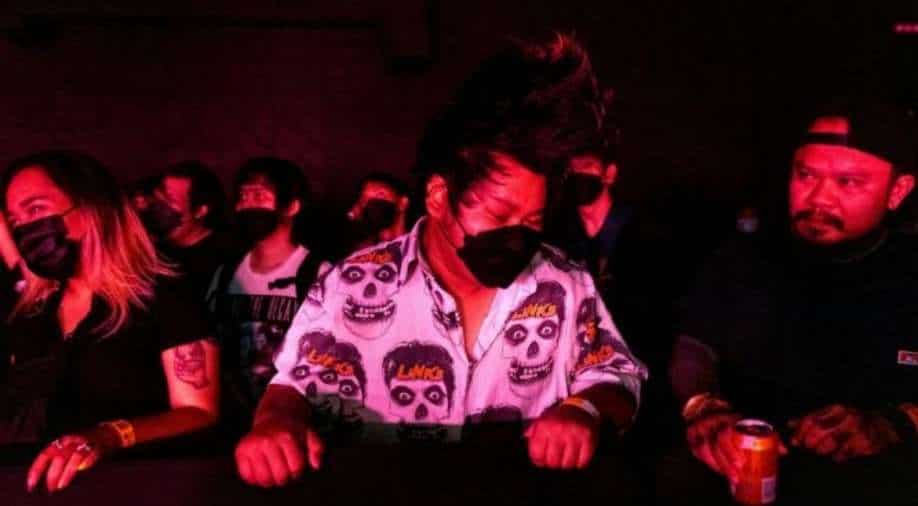 Hundreds of headbanging metalheads rock out to the roaring guitars and thundering drums of Thai band Defying Decay, chanting along to their latest politically charged tune.

Hundreds of headbanging metalheads rock out to the roaring guitars and thundering drums of Thai band Defying Decay, chanting along to their latest politically charged tune.

The group's single "The Law 112: Secrecy and Renegades" is a raucous, defiant anthem with a taboo-defying message -- challenging Thailand's draconian lese majeste laws.

Criticising the royal family is punishable by up to 15 years in jail, but calls for royal reform -- once completely off-limits -- spilled into the open during a series of major youth-led street protests against the government in 2020.

Saturday night's energetic Bangkok crowd was the first in Thailand to see a live performance of the song, which had already found an audience on US rock stations in November.

The 112 of the title refers to the lese majeste section of Thailand's criminal code, but the song's lyrics avoid criticising any person or institution by name.

"I like to have the lyrics open for interpretation and for everyone to have their own meaning... when I write my songs," vocalist and lyricist Poom Euarchukiati told AFP.

A line in the song about corruption could also find support from royalists or the police, not just anti-government protesters, said the 25-year-old frontman.

Despite the song's contentious title, the main source of inspiration comes from the plot of fantasy video game "Dark Souls", in which corruption is a major theme, Poom said.

The protests calling for political reform that rocked Bangkok in 2020 exposed a generational split in Thailand between youngsters yearning for change and a more conservative older generation.

Poom said his mother was not happy when news of the song's contentious title emerged.

"My mother originally said 'you can't do this'. But then I showed her the lyrics and she was fine with it," he said.

Defying Decay are the latest Thai band to use their music to challenge the establishment.

Released more than three years ago, Rap Against Dictatorship's "Prathet Ku Mee (My Country Has)" made headlines at home and abroad with its politically driven lyrics and aggressive rhymes, narrating a slew of corruption cases.

The hip-hop collective's in-your-face music video, which includes a re-enactment of a notorious 1976 student massacre, also sent a powerful message to the global audience about the country's dark past.

With a limited market for their brand of alternative metal in Thailand, the seven-member band mainly focuses on touring overseas.

At its peak in the second half of 2020, the protests demanding royal reform and the resignation of Prime Minister Prayut Chan-O-Cha -- who took power in a 2014 coup -- drew tens of thousands to the streets of Bangkok.

But the movement petered out as coronavirus restrictions hampered rallies and demonstrators were hit with lese majeste charges.

There have been 170 individuals charged under the royal insult law since November 2020, according to the Thai Lawyers for Human Rights organisation.

Political activist Parit Chiwarak, known by his nickname "Penguin", faces the most charges with 23. He has been held in pre-trial detention since August.

At a UN rights meeting last year, the Thai government's representative defended the lese majeste legislation, saying it "reflects the culture and history of Thailand, where the monarchy is one of the main pillars of the nation".

But from a musician's perspective, the law needs to be "updated" to be compatible with the modern world and prevent "misuse," Poom said.

But imminent change could be far away.