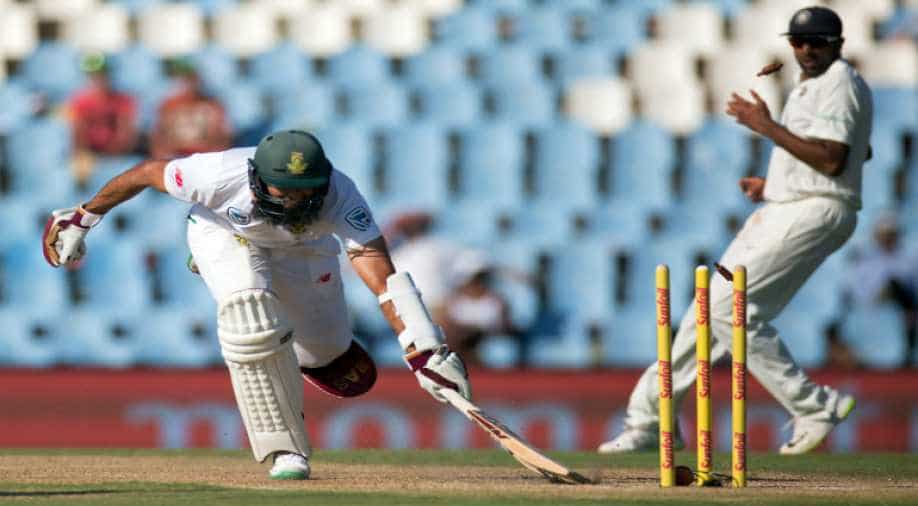 Amla looked in total control of his innings and struck 14 fours in his 82 before being called through for a risky single by Du Plessis. Photograph:( Reuters )

India surged back into contention against South Africa after two run outs late on Saturday, including the key wicket of Hashim Amla, saw the hosts slip to 269 for six at the close on the opening day of the second test.

South Africa had seemed set for a big first innings total when they reached 246 for three but some brilliant fielding and poor decision making combined to rattle their middle order and leave the honours even after the first day.

Home captain Faf du Plessis is not out on 24 and will resume his innings on Sunday with Keshav Maharaj (10) on a slow wicket that is expected to quicken over the next few days.

Amla looked in total control of his innings and struck 14 fours in his 82 before being called through for a risky single by Du Plessis.

The bowler, Hardik Pandya, reacted quickly though and his speed to the ball, swivel and quick release to the bowlers’ end found Amla two feet short.

Quinton de Kock was then out for a first ball duck, caught at slip by India captain Virat Kohli off the bowling of hard-working spinner Ravichandran Ashwin (3-90), who sent down an impressive 31 overs on the opening day.

The hosts` misery was compounded when Vernon Philander was also out without scoring, charging down the wicket for a run as Du Plessis screamed at him from the non-striker`s end to stop. Both players ended up on the same side of the wicket.

The poor half-hour undid the excellent work of opener Aiden Markram earlier as he compiled an eye-catching 94 before being caught by wicketkeeper Parthiv Patel off Ashwin, denied a third test century in seven innings.

Dean Elgar (31) was Ashwin’s other victim, while impressive seamer Ishant Sharma (1-32) induced an edge from the dangerous AB de Villiers (20) onto his own wicket.

The wicket has also shown some variable bounce already and is expected to break up on days four and five.

South Africa have selected uncapped seamer Lungi Ngidi as a replacement for the injured Dale Steyn, the only change to their side from the 72-run first test victory in Cape Town.