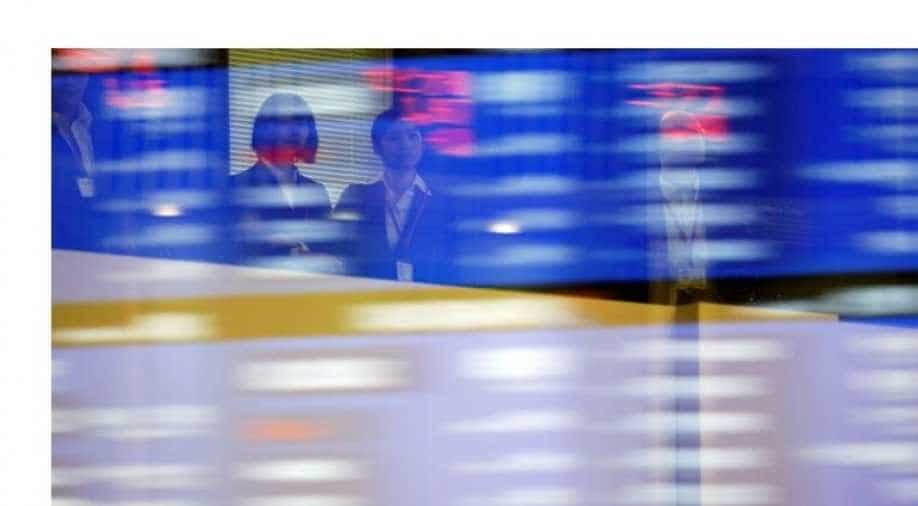 Visitors are seen as market prices are reflected in a glass window at the Tokyo Stock Exchange (TSE) in Tokyo, Japan, October 1, 2018. Photograph:( Reuters )

US Treasuries yields extended their decline, with the 10-year rate falling to 1.716 per cent, edging down further from 1.908 per cent marked on September 13.

Global shares ticked up on Tuesday after US Treasury Secretary Steven Mnuchin said that US-China trade talks will resume next month, but lingering concerns about slowing global growth tempered the overall appetite for riskier assets.

MSCI's broadest index of Asia-Pacific shares outside Japan moved up 0.06 per cent, supported by 0.4 per cent gains in mainland Chinese shares, while Japan's Nikkei edged up 0.20 per cent after a market holiday on Monday.

U.S. stock futures gained 0.39 per cent, helped by comments from US Treasury Secretary Steven Mnuchin that US-China trade talks will resume next week. He later clarified that the negotiations will take place in two weeks.

"The comments gave a little bit of boost to sentiment, but markets are still not that optimistic either," said Masahiro Ichikawa, senior strategist at Sumitomo Mitsui DS Asset Management.

"It seems there has been a lot going on behind the scenes," he said, referring to unusual exchanges in which US President Donald Trump questioned a decision by his top trade negotiators to ask Chinese officials to delay a planned trip to U.S. farming regions.

That cancellation was seen by markets as a sign of fallout in the US-China talks and sent share prices lower on Friday.

The dispute between the world's two largest economies has dragged on for well over a year, rattling investors and denting global growth.

Concerns over a slowing global economy remained front and centre for financial markets, as poor business activity readings from the eurozone deepened fears of a recession and suggested more stimulus was required.

"While speculators have reacted to the trade-related headlines, real-money people appear to be staying on the sideline", Kamai added.

Sterling also slipped to $1.2435, having peaked at a two-month high of $1.2582 set on Friday as traders looked to a Supreme Court ruling on whether Prime Minister Boris Johnson misled Queen Elizabeth over his reasons for suspending parliament this month.

The Supreme Court said that it will issue its decision at 0930 GMT on Tuesday.

The collapse of the British travel firm Thomas Cook could also put some pressure on the Pound by highlighting the weakness of British retailing.

US Treasuries yields extended their decline, with the 10-year rate falling to 1.716 per cent, edging down further from 1.908 per cent marked on September 13.

Oil prices dipped slightly but were still supported by doubts on whether Saudi Arabia would be able to restore full output as it has promised after the September 14 attacks on its facilities.