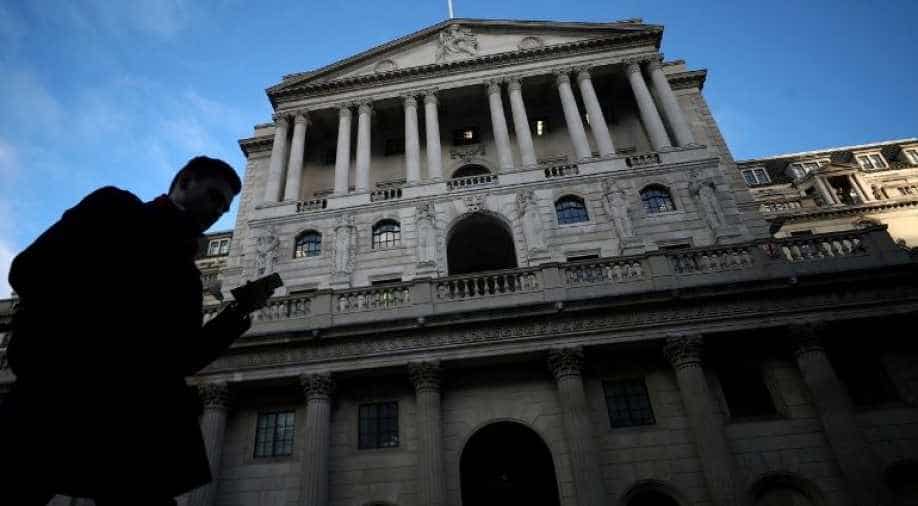 The BoE's Monetary Policy Committee (MPC) voted 9-0 to keep rates unchanged at 0.75 per cent, as expected in a Reuters poll of economists and said rates could move either way, whatever form Brexit takes.

The Bank of England cut its growth forecasts on Thursday in the face of increased Brexit worries and a slowing global economy but gave no indication it was considering lowering interest rates like other central banks.

A day after the US Federal Reserve reduced rates for the first time since the global financial crisis, the BoE said it still expected to raise borrowing costs gradually though this now hinged on a global pick-up as well as a "smooth" Brexit.

The BoE's Monetary Policy Committee (MPC) voted 9-0 to keep rates unchanged at 0.75 per cent, as expected in a Reuters poll of economists and said rates could move either way, whatever form Brexit takes.

With new Prime Minister Boris Johnson committed to taking Britain out of the European Union on Oct. 31 regardless of whether he can secure a transition deal markets see increased risks of a disorderly, no-deal Brexit.

The BoE said this had led to "a marked depreciation of the sterling exchange rate" which is near a three-year low against a basket of other major currencies and that as of mid-July, business uncertainty about Brexit had become "more entrenched".

"Underlying growth appears to have slowed since 2018 to a rate below potential, reflecting both the impact of intensifying Brexit-related uncertainties on business investment and weaker global growth on net trade," the BoE said.

There was a little immediate market reaction to the statement.

"All eyes will be on the MPC's September meeting. If a disorderly exit from the EU is on the cards, the Bank must not shy away from lowering interest rates in advance to support businesses and households through the turbulence," the Institute of Directors' chief economist, Tej Parikh, said.

The BoE's forecasts assume Britain avoids a Brexit shock, but still foresee a growth of 1.3 per cent for 2019 and 2020, down from 1.5 per cent and 1.6 per cent respectively in its last forecasts in May.

This leaves British economic growth roughly in line with that of the eurozone, which Britain used to regularly outperform before June 2016's referendum decision to leave the EU.

The forecasts also showed a relatively high 30 per cent chance of negative year-on-year growth in the first three months of next year. A recession is typically defined in Europe as two consecutive quarters of negative quarter-on-quarter growth.

The weaker growth outlook comes despite the implicit stimulus from the expectations in markets of a rate cut that the BoE mechanically factors into the forecasts.

Before Thursday's announcement, markets were pricing in an almost 90 per cent chance that the BoE will cut rates by 25 basis points before Governor Mark Carney steps down at the end of January.

In large part, this reflects the possibility of a significant loosening of BoE policy if there is a no-deal Brexit, to which economists polled by Reuters on average gave a 30 per cent probability.

The European Central Bank is expected to cut rates in September.

Carney will say more about the BoE's thinking in a news conference at 1130 GMT.

The updated BoE forecasts show the central bank expects inflation currently on target at 2 per cent to exceed its target in two and three years, and by a greater margin than it predicted in May.

The BoE said growth and inflation would both probably be slower in the case of a smooth Brexit than its forecasts show, due to a likely snap-back in sterling and market interest rate expectations.

Taking this into account, inflation in three years would not necessarily exceed the BoE's target, but the BoE still foresaw the domestic economy overheating, requiring higher interest rates.