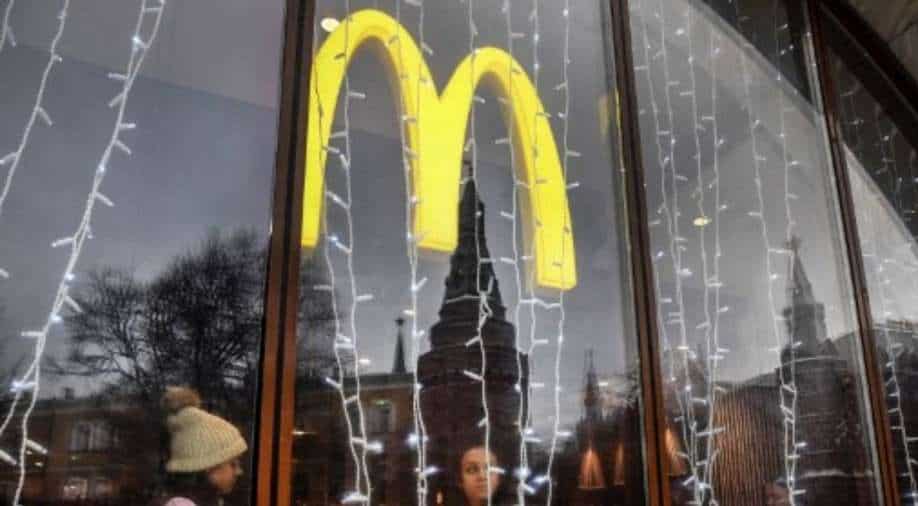 In this file photo taken on January 30, 2020 people look out of the window of a McDonald's restaurant as the towers of the Kremlin reflect in it in Moscow. Photograph:( AFP )

McDonald's has reached a deal to sell its Russia business to Russian businessman Alexander Govor, who is a licensee of the renowned multinational American fast-food chain. He runs the franchise operation through his firm GiD LLC.

Govor will rebrand the restaurant under a new name as discussions are already happening over the new name. Telegraph reported that Russia could rename McDonald's "ZBurger" or "Rusburger". On social media, there were some other suggestions as well, such as, "Rosburger", "RusDonald's", "Nashmak", "Mashkinfarsh", etc.

Telegraph quoted the Russian Ministry of Trade as writing after an online discussion: "This was a great brainstorm! Thanks for taking part. We will give the most creative ones to the Russian owner."

The media report also added that social media users are also predicting McDonald’s classic menu items. As some suggested that the items might get replaced by more traditional Russian options such as borscht.

Russia's trade ministry is inviting the public to suggest a new name for McDonald's after it sold its restaurants there to licensee Alexander Govor. Suggestions so far include Rusdonald's, Rusburger and McGovor's https://t.co/gWJNmGQbBi

McDonald's said that Govor will retain employees for at least two years on equivalent terms and will pay employee salaries in 45 regions of Russia until the closure of the sale.

Notably, Govor has been a McDonald's licensee since 2015 and had helped the chain expand into remote Siberia, where he operates 25 restaurants.

On Monday, McDonald's said that it has decided to sell the entire Russian portfolio of 850 restaurants in the aftermath of the Ukraine invasion on the orders of Russian President Vladimir Putin.