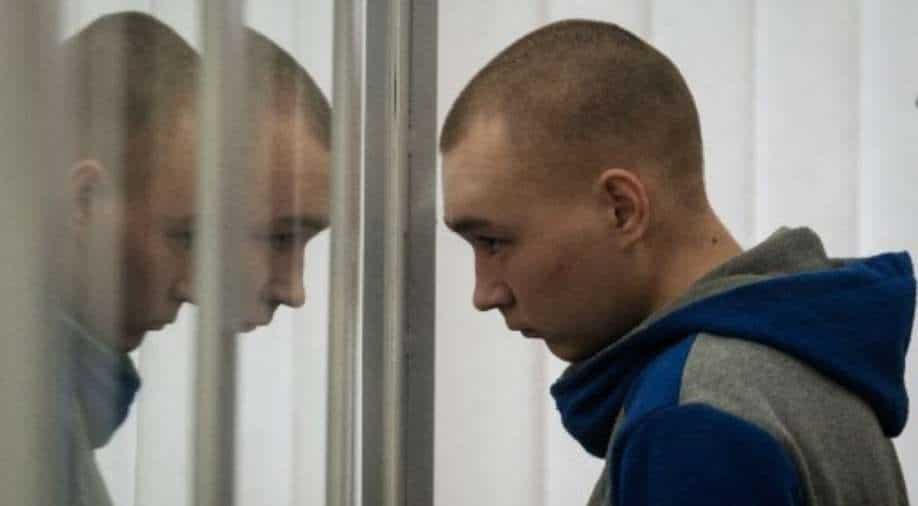 Russian Sergeant Vadim Shishimarin stands and listens translator's words in the defendant's box during his trial on charges of war crimes for having killed a civilian at the Court of Appeal in Kyiv, on May 20, 2022. Photograph:( AFP )

While concluding, defence lawyer Viktor Ovsiannikov told the court that Shishimarin had fired the rounds out of fear for his own safety

During the second hearing on Friday (May 20), the first Russian soldier who is facing war crime charges in Ukraine has said that he is "truly and sincerely sorry" and added that he will accept any punishment from the court.

The 21-year-old Russian tank commander, identified as Vadim Shishimarin, has pleaded guilty to killing a 62-year-old civilian Oleksandr Shelipov in the northeast Ukrainian village of Chupakhivka on February 28, a few days after Russia started the invasion of Ukraine.

Shishimarin told the court that he "was nervous about what was going on" and said that he "didn’t want to kill" Shelipov. He even asked Shelipov's widow for forgiveness. Meanwhile, the prosecutors have asked for life imprisonment for Shishimarin.

The Russian soldier said, "I'm truly and sincerely sorry. I didn't want that to happen, I didn't want to be there, but it happened. I would like to apologise once again. And I will accept all the measures of punishment that I will be offered."

On the other hand, while concluding, defence lawyer Viktor Ovsiannikov told the court that Shishimarin had fired the rounds out of fear for his own safety. The lawyer also asked whether the defendant had intended to kill.

Ovsiannikov argued that the Russian had only fired the rounds after twice refusing to carry out the order to shoot. He said that only one out of three-to-four rounds hit the target.

Ovsiannikov said, "He was sitting at the window of a car... the car was moving at high speed with a punctured tyre. I conclude that Shishimarin fired aimless shots and did not intend to kill the civilian, and that he carried out the order not with the aim of killing the person, but formally, with the hope that (the rounds) would not hit".

He said: "I personally think that it should not be this young man in the dock, but the senior leadership of the other country that I think is guilty of unleashing this war."

A verdict in the case might be announced on Monday when the court next convenes.