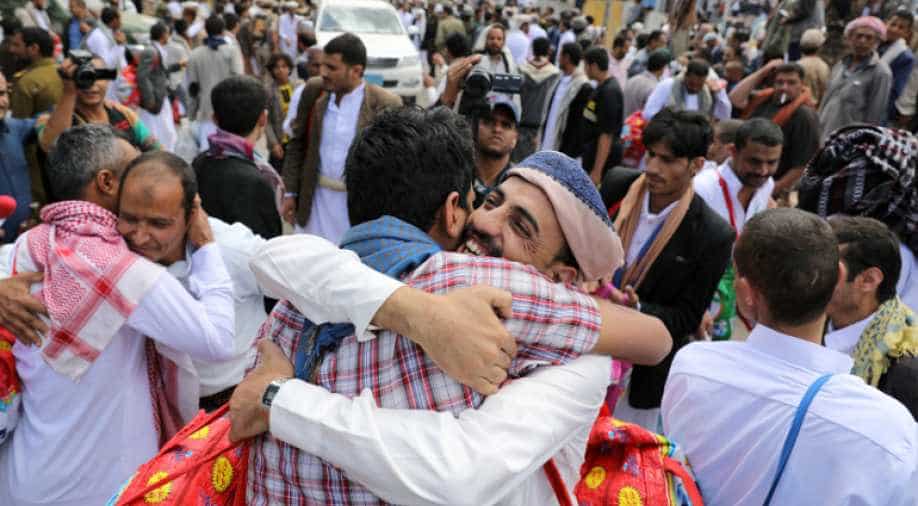 Detainees hug relatives after their release by the Houthis outside the central prison of Sanaa, Yemen September 30, 2019. Photograph:( Reuters )

The International Committee of the Red Cross hailed the move as 'a positive step that will hopefully revive the release, transfer and repatriation of conflict-related detainees' under a deal struck last year between the rebels and Yemen's government

Yemen's Houthi rebels have freed 290 prisoners, including dozens of survivors from a Saudi-led coalition strike on a detention centre earlier this month, the ICRC said Monday.

The International Committee of the Red Cross hailed the move as "a positive step that will hopefully revive the release, transfer and repatriation of conflict-related detainees" under a deal struck last year between the rebels and Yemen's government.

The Houthis recently announced the capture of hundreds of Yemeni loyalist forces in an August offensive near the Saudi border, but they were not among those freed on Monday.

"I hope this step will lead to further initiatives that will facilitate the exchange of all the conflict-related detainees as per the Stockholm Agreement" Griffiths said, referring to the 2018 accord.

He called on all parties to work together to speed prisoner releases, saying they and their families had "endured profound pain and suffering."

In a statement, he urged the parties to meet at the "nearest opportunity" to resume the discussions on future exchanges.

The Houthi's own announcement on the prisoner release said there were 350 in the group, including three Saudis.

"We have presented to the United Nations a unilateral initiative to release 350 prisoners," Abdel Kader Mortaza, the Houthi official in charge of prisoner affairs, said at a press conference in Sanaa.

Years of conflict in Yemen have killed tens of thousands of people, mostly civilians.

Since the Saudi-led coalition intervened to back up the government in 2015, the fighting has plunged the country -- the poorest in the Arab world -- into what the UN calls the globe's worst humanitarian crisis.

In early September, a Saudi-led coalition backing the government struck a former college in the western city of Dhamar, used by the Houthis as a detention centre.

The Red Cross said over 100 people were killed.