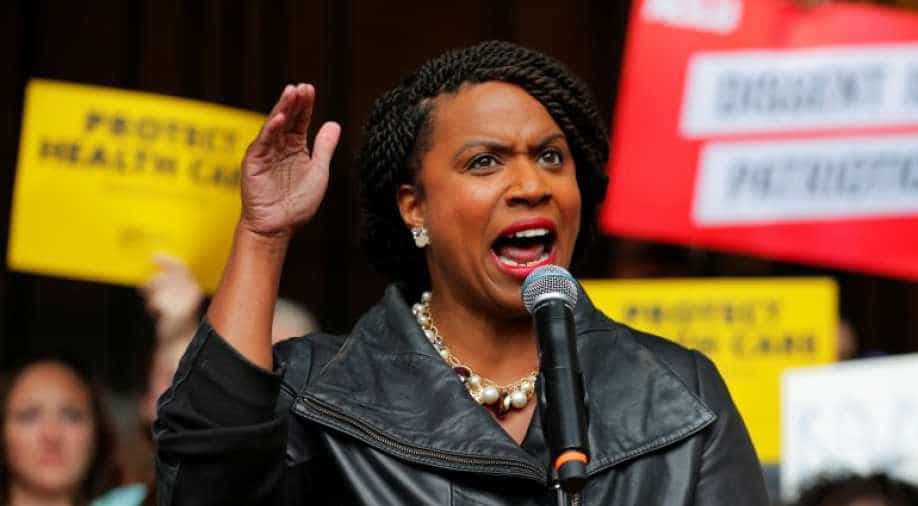 First-time political candidate Jahana Hayes has a simple explanation for why she - and a record number of other women - ran for seats in the US Congress this year.

"Many women like me are just tired of waiting for someone else to do it," said Hayes, who was elected Tuesday to represent a broad swath of Western Connecticut in the House of Representatives.

In the November 6 elections, there were 237 women on ballots for House seats and at least 95 had won their races as of early Wednesday morning, shattering the previous record of 84 women in the House, according to the Center for American Women and Politics at Rutgers University.

Eighty-three of the women who won were Democrats. The first three House seats Democrats wrested from Republicans were won by women.

The enthusiasm for women's candidacies had Democrats on track early Wednesday to pick up around 30 seats, with some races still undecided - more than the 23 they needed to gain control of the chamber.

In dozens of interviews ahead of Tuesday's election, Democratic women candidates and voters told Reuters that they felt Congress was not addressing issues important to them, including education, healthcare, gun control and immigration.

As catalysts for their political engagement, many of them also cited the #MeToo movement against sexual assault, Trump's 2016 election despite multiple sexual misconduct allegations, and the confirmation of Supreme Court Justice Brett Kavanaugh after allegations about his sexual misconduct in high school were made by Christine Blasey Ford.

Nearly 80 per cent of the women competing in House races this year were, like Hayes, Democrats, according to the center's data. But their stories, politics and reasons for seeking office were varied.

Women from Michigan and Minnesota will be the first Muslim women in the House. Candidates from Kansas and New Mexico will be the first Native American women in Congress. Texas elected two Latinas to the House for the first time. Some women who won are veterans; others used to work for the CIA.

Hayes, who will be the first black woman to represent Connecticut in Congress, grew up in public housing and openly talks about her mother's past substance abuse. At 17, she became pregnant with her first child, but she persisted with her education, graduating from college, getting a master's degree and becoming a teacher.

When it comes to politics, Hayes says her political success was unanticipated. "Nothing in my life says I should be here," she has said.

Hayes points to a 2017 meeting in Washington - one of many she attended after being named national Teacher of the Year in 2016 - as the point when she started to think beyond her classroom. Trump's Education Secretary Betsy DeVos was there and explained her vision for expanded school choice.

"She made the comment 'I'd like to move government out of the way so that parents can make the decision for their kids,'" Hayes said in an interview with Reuters.

"I didn't have a family that could make those decisions for me. That's our job as educators: to advocate for kids who don't have anyone else to do it for them," she said.

Wanting to have a broader impact, Hayes, 46, became director of teacher training in Waterbury, Connecticut. Then, less than two weeks before the state's Democratic Convention in May 2018, she decided to run for the House seat being vacated by Democrat Elizabeth Esty.

Hayes' opponent in an August primary election to choose the Democratic candidate, Mary Glassman, was an experienced politician with official backing from the state party and endorsements from the pro-business US Chamber of Commerce and liberal groups like MoveOn. Hayes nevertheless routed Glassman by a 62-38 vote. She won with more than 55 per cent of the vote on Tuesday.

"Traditionally, elected officials, especially in Congress, take the same path," rising through the political ranks, Hayes said. "Everything about my experience, my background, the way I got here is different."

Some women followed more familiar routes, serving in other elected offices before running for Congress.

Jennifer Wexton, who unseated Republican US Congresswoman Barbara Comstock in a suburban Virginia House district outside Washington, DC, is a state senator.

Ayanna Pressley is a Boston city councilwoman elected on Tuesday to be the first black woman representing Massachusetts in Congress.

Wexton said she opted to make the jump from state legislature to federal office in response to Trump's "constant attacks on women, immigrants the environment, free press, the intelligence community, independent judiciary, you name it."

Wexton's opponent, Comstock, won their suburban district by more than 5 points in 2016, despite Democrat Hillary Clinton carrying it by nearly 10 points over Trump.

This year's House race was widely seen as a referendum on the president's performance.

Lorayne Blacka, 63, was at a Wexton event the week before the elections holding a "#ResistandWin" sign. She lives in a neighboring safe Democratic district and the first-time political volunteer said she began to engage after attending the March for Our Lives against gun violence this spring.

"Then, what really got me going was the thing at the border, I've never been so angry in my whole life," Blacka said of the Trump administration's now-abandoned policy of separating immigrant families. The policy drew thousands of women to protest at the US Capitol.

"This administration has been a wake-up call," Blacka said.

Pressley spoke openly on the campaign trail about surviving sexual assault and the impact of incarceration on her family. She defeated a 10-term Democratic congressman during her primary campaign, but ran unopposed on Tuesday.

In an interview, she described the administration's policies as a "locomotive that has been coming at us to roll back every civil right protection and freedom that we've fought for."

Pressley said women have been emboldened: to vote, to volunteer, to write checks, to run for their first political office or aim for a higher one.

"When we stood on the Boston Common (after) the Nov. 2016 elections for the Women's March, we held signs that said: 'Today we march, tomorrow we run.' They just didn't believe us," she said.