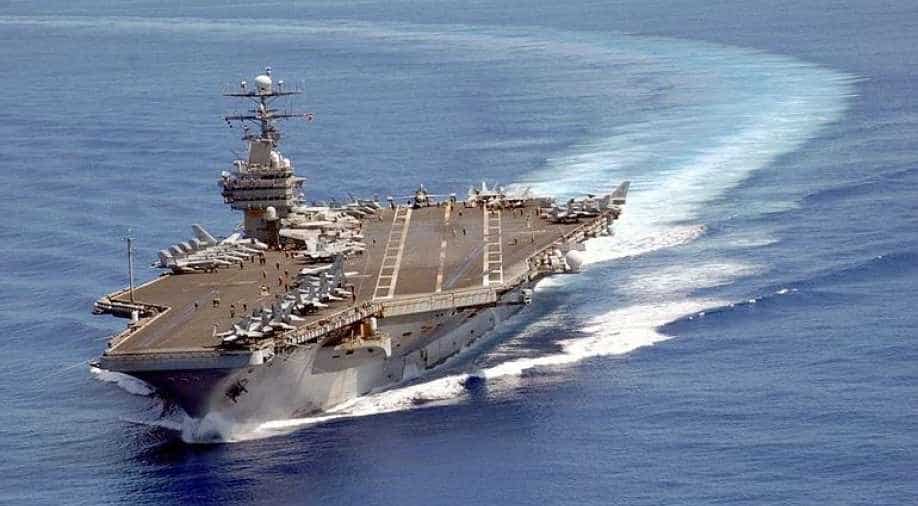 The USS Carl Vinson will make a four-day port call to the central city of Danang for a highly symbolic trip. Photograph:( Others )

A US aircraft carrier arrived in Vietnam today for the first time since the end of the war, as the former foes bolster military ties in the face of Beijing's build-up in the disputed South China Sea.

The USS Carl Vinson will make a four-day port call to the central city of Danang for a highly symbolic trip that will include a visit to a centre for victims of Agent Orange, the toxic defoliant sprayed over large swathes of land by the US during the Vietnam war.

But ongoing tensions in the South China Sea loom over the trip as Beijing continues to build artificial islands capable of hosting military installations -- much to the chagrin of Vietnam and other claimants to the sea.

Though the US is not a claimant to the resource-rich waterway, it has long lobbied for freedom of navigation in the sea to counter China's growing influence.
Analysts say the port call, which follows a visit to the Philippines last month, is a chance for the United States to flex its military muscle in Asia.

"It's a US push... To demonstrate a massive naval presence in the South China Sea area to China, that the US is staying engaged," Vietnam expert Carl Thayer told AFP ahead of the trip.

Vietnam remains the most vocal claimant in the region after the Philippines backed off under China-friendly President Rodrigo Duterte. Taiwan, Malaysia and Brunei also have claims in the sea.

Duterte has refused to implement a landmark 2016 international tribunal ruling in Manila's favour over its competing claims with Beijing.

"The Philippines has just rolled over, China is continually militarising and if the US doesn't maintain a presence in the region, Vietnam's got nowhere to hide," Thayer said.

The visit is also being touted as a key landmark between the former bitter enemies, whose relations have seen an extraordinary turnaround since the end of the war in 1975.

Though US ships have regularly docked in Vietnam in the past, this is the first time an aircraft carrier will make a port call to the country.

The nuclear-powered USS Carl Vinson is home to 5,300 sailors, pilots and crew and 72 aircraft and will be in Danang -- once a key US airbase -- until its departure on Friday.

The visit includes friendly basketball and soccer matches between US sailors and locals, along with an orphanage visit and navy band concerts.