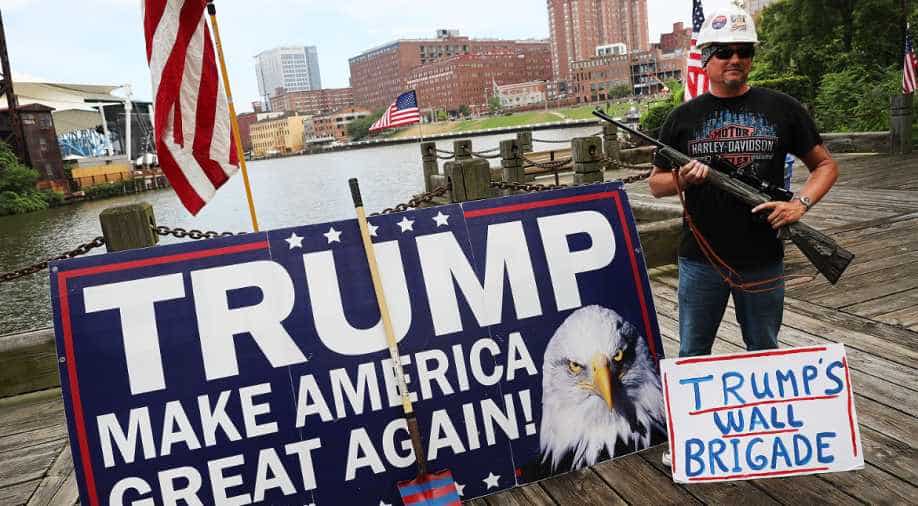 Representational Image: A Donald Trump supporter attends a rally for Trump on the first day of the Republican National Convention (RNC) on July 18, 2016 in downtown Cleveland, Ohio. Photograph:( Getty )

On the campaign trail, Republican presidential nominee Donald Trump has explicitly warned, without foundation or evidence, that the US election will be "rigged" against him.

As a result, everybody from state leaders, voting experts and election advocates are preparing for an inordinate amount of confusion and chaos, the Washington Post reports, as the US election begins Tuesday after an unusually fierce and bitter presidential race.

In some states, advanced voters have faced lineups over four hours long. It has even been taken to court, as Democrats have filed lawsuits against Donald Trump supporters.

In Virginia, America's wealthiest state, a man with a Trump shirt and a gun stood outside a polling station. He was said to be cooperative with the authorities when they confronted him, and complied with the regulation about standing far enough away from the entrance of the polling station. But he had already asked voters which candidate they favoured, and some, who saw the gun, said they were intimidated.

Election monitors are worried this year as the prospect of voter intimidation appears to be very real after Trump's direct and repeated calls for his supporters to stake out other polling stations and watch out for suspicious activity.

Actually, the first example of voter fraud was committed by a Trump supporter who voted twice because she feared Trump's unsubstantiated claim that her vote wouldn't be counted would come true.

The Washington Post reports that election officials in Pennsylvania and Arizona have become so concerned about voter intimidation that they have issued specific advisories outlining what types of threatening behaviour are not permitted, and exactly what distance they need to keep surrounding polling places.

A notice issued by Pennyslvania's secretary of state reads "Individuals who conspire to interfere with a person's right to vote can face up to 10 years in prison". This was posted after Trump singled out Philadelphia as a place for his supporters to scrutinise.

"The number and tenor of calls we've received about problems, the amounf of litigation you already see, it all reflects the moment we're in," said Kristen Clarke, president of the nonpartisan Lawyers' Committe for Civil Rights Under Law, as quoted by the Washington Post.

They report that her group will be running America's largest independent effort to deal with voters complaints, concerns and questions. The nonpartisan organisation "Election Protection will have as many as 4,500 legal volunteers answering calls sent to the hotline 866-OUR-VOTE, and 2,500 volunteers are stationed at polling sites around the US".

The Washington Post further states that Clarke's has set up a headquarters in Washington where hundreds of lawyers are working for free so they can attend to all the conerned calls by voters poring in.

The worst problem may not be intimidation exactly, but another form of voter suppression: long lines. By changing laws to reduce the number of polling stations available, especially in areas where minorities (who skew Democrat) live, it means voters need to travel longer to get to a polling station, and need to wait there for longer in order to vote. It's designed systematically to discourage would-be Democrat voters

There is special attention being paid to Florida and Ohio, where in 2012 some stations in Miami were so clogged that voters were still casting ballots at 1 am, while President Obama was giving his victory speech, the Washington Post reports.

A group called Stop the Steal, run by Republican operatives and a trump adviser named Roger Stone, has been signing up "vote protectors" to stand outside polling stations. As of yesterday, 3,191 had signed up, the Washington Post reports

"This is our best chance to stop the Democrats from stealing the election from Donald Trump. Help us fight a rigged system," the group posted on its website. In addition to signing people up to patrol polling stations, the group also solicits monetary donations from visitors.

The Guardian reports that while 41 per cent of Americans believe the election is rigged, an independent legal expert determined that out of over a billion ballots cast, there were only 31 cases of voter fraud, nowhere near enough to alter an election even slightly.

What this fraught atmosphere this means for the 2016 election, and whether whoever loses the race will accept the result, remains to be seen. Hopefully the fears of fraud, intimidation and suppression turn out to be blown out of proportion, but only time will tell.