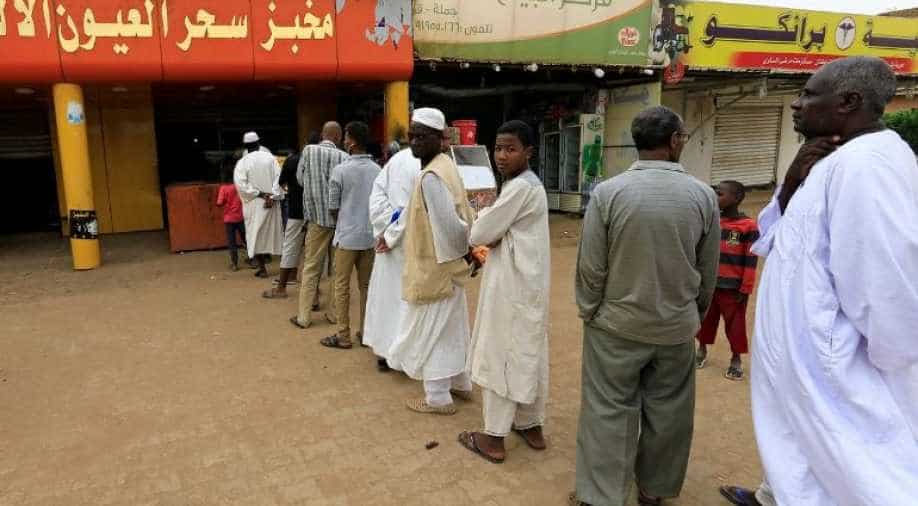 Sudanese civilians stand in a queue to a bakery in Khartoum, Sudan June 11, 2019. Photograph:( Reuters )

An Ethiopian envoy has said that the military and opposition groups have agreed to resume talks on the formation of a transitional council that collapsed after the violent dispersal of a protest sit-in on June 3.

The top US diplomat for Africa on Wednesday joined an international effort to press Sudan's military rulers and the opposition toward a deal on a transition to democracy two months after the overthrow of former President Omar al-Bashir.

An Ethiopian envoy has said that the military and opposition groups have agreed to resume talks on the formation of a transitional council that collapsed after the violent dispersal of a protest sit-in on June 3.

Tibor Nagy, the US assistant secretary of state for Africa, met on Wednesday with the main opposition coalition and held talks with Sudan's acting Deputy Foreign Minister Ilham Ibrahim.

Before the meetings, the State Department said Nagy was going to urge the parties to work toward an environment conducive to the resumption of negotiations. The United States also on Wednesday named veteran diplomat Donald Booth as its envoy to Sudan.

After meeting Nagy, the main opposition coalition said that it would only participate in indirect talks and it would impose other conditions.

"We have informed the Ethiopian prime minister that we refuse to have direct negotiations with the transitional military council," said Madani Abbas Madani, a leader of the Declaration of Freedom and Change Forces.

"The point of contention between us is clear and our terms are clear; we are talking now about issues of transition to civilian rule and the rights of martyrs."

The bloodshed has drawn expressions of concern from world powers including the United States, which imposed sanctions on Sudan under Bashir over its alleged support for militant groups and the civil war in Darfur.

Stability in the nation of 40 million is crucial for a volatile region struggling with conflict and insurgencies from the Horn of Africa to Egypt and Libya.

The military council has been bolstered by support from Saudi Arabia and the United Arab Emirates, which between them have offered $3 billion in aid.

"The current detente in Sudan calls for optimism and we call for the establishment of an agreement that will drive the transitional phase through a real and stable partnership," UAE Minister of State for Foreign Affairs Anwar Gargash said on Twitter.

He also praised the role of Ethiopian Prime Minister Abiy Ahmed, who flew to Khartoum last week on a mediation mission and is expected to return this week.

The June 3 crackdown led to at least 118 deaths, according to opposition-linked medics. The government has confirmed 61 deaths, including three security personnel.

Sudan's Foreign Ministry summoned the British ambassador, Irfan Siddiq, on Wednesday to protest his remarks, SUNA reported. As authorities tried to disperse the main protest site last week, he tweeted: “No excuse for any such attack. This. Must. Stop. Now."

Talks between the military and the opposition were already deadlocked before the crackdown as the two sides struggled to agree on the make-up of a sovereign council that will oversee the transition.

In Khartoum, employees returned to work on Wednesday and store owners opened their shops, after the alliance of protesters and opposition groups suspended a three-day campaign of strikes and civil disobedience.

Many people lined up outside ATMs and banks that had closed first for the Eid holiday at the start of June and then because of the strike.

Sudan is still suffering an internet outage. Some side streets that had been closed by protesters were still partially blocked by remnants of barricades. Rubbish bins not emptied for days were overflowing.