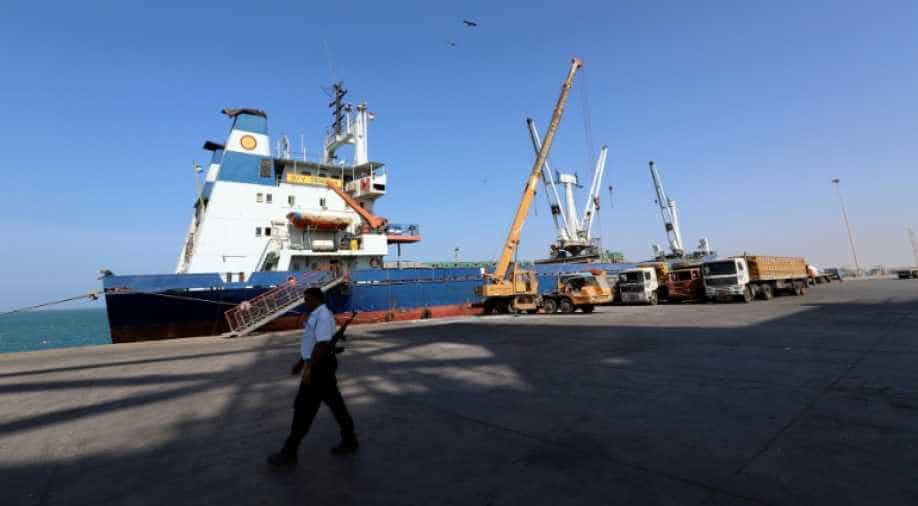 File photo of a coast guard walks past a ship docked at the Red Sea port of Hodeidah, Yemen. Photograph:( Reuters )

The first day of the redeployment by Huthi insurgents from the ports of Hodeida, Saleef and Ras Issa on Saturday 'went in accordance with established plans,' a UN statement said.

The United Nations said Sunday that a Yemeni rebel withdrawal from key Red Sea ports was proceeding as planned after the government accused the insurgents of faking the pullout.

The first day of the redeployment by Huthi insurgents from the ports of Hodeida, Saleef and Ras Issa on Saturday "went in accordance with established plans," a UN statement said.

"All three ports were monitored simultaneously by United Nations teams as the military forces left the ports and the Coast Guard took over responsibility for security," it added.

Military equipment is expected to be removed in the coming days, while demining is also planned, the statement said.

Formal verification of the first redeployment will take place at the three ports on Tuesday, according to the UN.

Hodeida port serves as a lifeline for millions in the impoverished Arabian Peninsula country, which has been pushed to the brink of famine by more than four years of devastating war.

The pullback is considered a first step in implementing a hard-won truce agreement for Hodeida struck in Sweden in December between Yemen's Saudi-backed government and the Iran-aligned Huthi rebels.

Yemen's information minister dismissed the rebels' announcement, accusing them of "a policy of deception."

"What the Huthi militia did is a repeated theatrical play of handing over control of the port to its own forces (in different uniforms)," Moammer al-Eryani tweeted.