UN peacekeepers deployed to northeastern Mali amid spate of killings 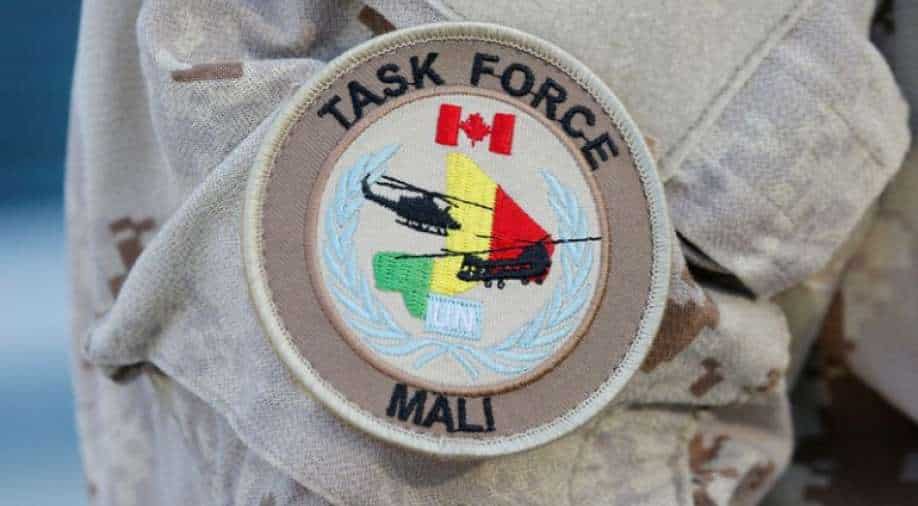 File Photo: A patch is seen on a member of Canadian Forces before departing for a United Nations peacekeeping mission in Mali. Photograph:( Reuters )

Civilians have been targeted during a cycle of reprisal attacks between ethnic Tuareg militia groups, including the Movement for the Salvation of Azawad (MSA), and the Islamic State in the Greater Sahara (ISGS), according to MSA and local sources

The United Nations peacekeeping force in Mali has deployed two units to the African country's tri-border area with Burkina Faso and Niger to respond to a spate of civilian killings, it said on Thursday.

A surge in attacks since early March by an Islamic State affiliate has left hundreds of civilians dead, according to official and military sources. The region has long been a hotspot of jihadist and militia violence in West Africa.

"The security situation in the Tri-border area... particularly in the localities of Tessit, Talataye, Ansongo and the Menaka region, has deteriorated considerably in recent weeks," said the U.N. peacekeeping mission, MINUSMA.

MINUSMA deployed one unit to the area over a week ago and was in the process of deploying another on Thursday, it said, adding that the attacks have resulted in "dozens of deaths".

Civilians have been targeted during a cycle of reprisal attacks between ethnic Tuareg militia groups, including the Movement for the Salvation of Azawad (MSA), and the Islamic State in the Greater Sahara (ISGS), according to MSA and local sources.

At least 500 civilians have been killed in the last three weeks in the regions of Gao and Menaka, said a military source, requesting anonymity because he was not authorised to speak.

A government official in Gao region said about 200 civilians were killed in the commune of Talataye between March 21 and 25, and thousands more displaced.

"We are expecting to be assassinated at any moment," he said, speaking on condition of anonymity for security reasons.

Mali's army conducted airstrikes in the Menaka region on March 13, which it said helped break the momentum of "terrorist groups". It has not given a death toll from the fighting.

Mali has faced instability since 2012, when Islamists hijacked an ethnic Tuareg rebellion in the north. French troops intervened to push them out of the cities they occupied, but they have since regrouped and spread across the Sahel region.

Mali's army has also been accused of killing civilians. A coalition of Tuareg groups on Wednesday issued a list of 17 people it said were arrested and executed by soldiers last weekend in the town of Ansongo.

A spokesman for the army did not respond to calls from Reuters. The army said in a statement on March 29 that it was investigating allegations of human rights abuses in the area and reinforcing protection of civilians in Menaka and Gao.

The army has faced similar accusations by the United Nations and human rights groups, and has in some cases acknowledged that its forces were implicated in executions.