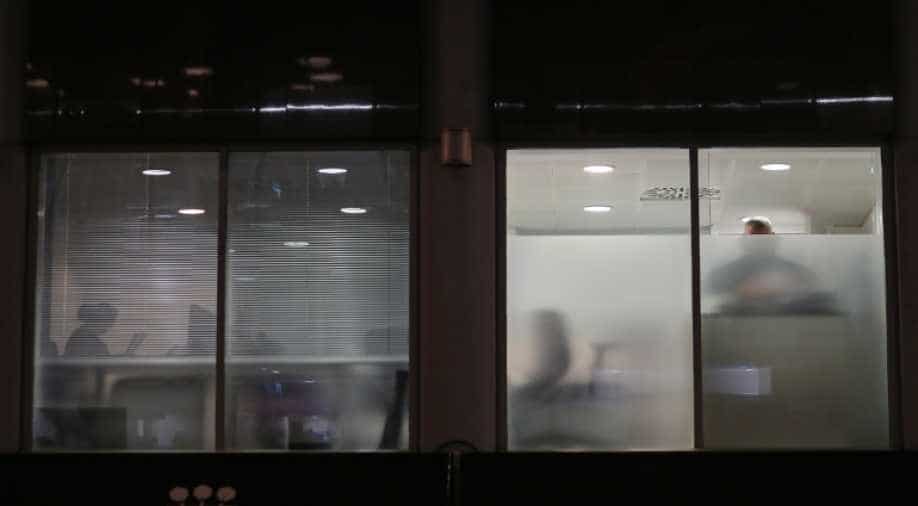 People are seen through blinds searching inside the offices of Cambridge Analytica in central London on the evening of March 23, 2018. Photograph:( AFP )

British regulators finished searching the offices of Cambridge Analytica, the firm at the centre of a Facebook data scandal, before dawn today and said they would examine the evidence before considering "next steps".

After receiving a warrant from a judge, about 18 enforcement agents from the Information Commissioner's Office entered the company's London offices at around 8:00 pm (local time) yesterday.

"Our investigators left the premises at about 03:00 am (local time)," a spokesman for the data watchdog said today.

"We will now need to assess and consider the evidence before deciding the next steps and coming to any conclusions.

"This is one part of a larger investigation by the ICO into the use of personal data and analytics by political campaigns, parties, social media companies and other commercial actors."

Cambridge Analytica, which worked on US President Donald Trump's election campaign, has been accused of illegally mining tens of millions of users' Facebook data and using it to target potential voters.

The row has sparked a major crisis for Facebook, prompting investigations on both sides of the Atlantic and sending its share price plunging amid fears of additional regulation that could affect its business model.

Chief executive Mark Zuckerberg has issued a public apology, admitting there had been a "major breach of trust".

Cambridge Analytica received data harvested in an app developed by an independent University of Cambridge academic, which was downloaded by around 270,000 people but scooped up information on up to 50 million people.

It denies the data was used in the Trump campaign, and Facebook says it was used without its knowledge.

Questions are also being raised about Cambridge Analytica's role in Britain's vote to leave the EU in 2016. It denies working on the campaign, but a former employee says it conducted data research for a key player, Leave.EU.