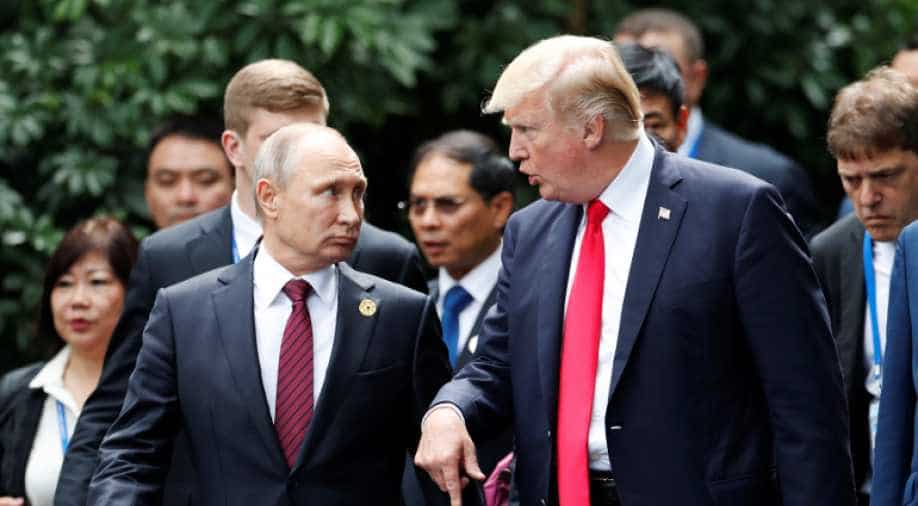 After Russian forces last weekend seized three Ukrainian ships off the coast of Crimea, Trump on Thursday said 'it would be best for all parties' to cancel his meeting with Putin.

Donald Trump's cancellation of weekend talks with his Russian counterpart is the latest in a series of collapsed efforts towards rapprochement.

After having promised during his 2016 electoral campaign to mend ties with Russia, the US president faced several global disputes that made a thaw difficult.

At the same time, the US special counsel's probe of possible collusion between Trump's campaign and Russia raised domestic suspicion over any efforts towards accommodation with his Kremlin counterpart.

Trump's own conciliatory attitude also stirred the hostility of an American Congress which has stood up to Moscow.

This time, it's the confrontation between Russia and Ukraine that intervened when the two leaders were supposed to meet Saturday at the G20 summit in Argentina.

After Russian forces last weekend seized three Ukrainian ships off the coast of Crimea, Trump on Thursday said "it would be best for all parties" to cancel his meeting with Putin.

Trump added that he looks forward to a "meaningful summit again as soon as this situation is resolved."

"The United States would welcome a normal relationship with Russia. But outlaw actions like this one continue to make that impossible," US Ambassador Nikki Haley told a UN Security Council meeting on Ukraine Monday.

Russia's annexation of the Crimean Peninsula from Ukraine in 2014 has led to numerous rounds of US sanctions.

But when he met Putin for a summit in July this year in Helsinki, Trump was restrained on issues related to Ukraine.

On other matters, the two presidents would like to cooperate, starting with war-ravaged Syria.

The US and Russia have backed competing factions in Syria, but on the sidelines of an APEC summit one year ago in Vietnam -- where the two presidents chatted together -- they issued a joint presidential statement that there was "no military solution" to the war.

This embryonic entente was quickly contradicted on the battlefield.

In April Trump ordered the US military to launch joint missile strikes against Syrian targets, with France and Britain, after an alleged chemical weapons attack that left scores of Syrians dead.

The use of a nerve agent against former Russian double agent Sergei Skripal and his daughter in England early this year also poisoned the warming of ties which Trump and Putin wanted.

In August the US said it was imposing new sanctions on Russia over the case. Washington also expelled 60 Russian diplomats for alleged spying, and Moscow retaliated in kind.

For Trump's detractors, the root concern is Russian interference in the 2016 election which brought him to power, and possible collusion between Moscow and Trump's campaign team -- an issue being investigated by Special Counsel Robert Mueller.

From the start, all the overtures Trump made in the direction of Putin were interpreted by his critics in light of suspected collusion.

Most of the more than 30 people charged by Mueller are Russians, but the investigator has also secured guilty pleas on various charges against former Trump aides.

Trump routinely denounces Mueller's investigation as a witch hunt and the White House has said it has polluted American-Russian relations.

As a result, questions are being raised as the Mueller probe seems to intensify -- and so do Trump's attacks on it.

"Did Trump cancel his meeting with Putin because of Russian attack on Ukraine or Cohen revelations?" the former US ambassador to Moscow, Michael McFaul, asked on Twitter.

Trump pulled out of the G20 Putin meeting after his former personal lawyer Michael Cohen pleaded guilty in court to lying to Congress about trying to negotiate a deal for a Trump Tower project in Moscow well into the middle of 2016.

At that time Trump had already secured the Republican nomination for president.

- Trump controversies -
But it is often the attitude of Donald Trump himself that finally undermines efforts at rapprochement.

Both in Vietnam in November 2017, then in Helsinki last July, the US president seemed to give more weight to Russian denials of alleged interference than to accusations by his own intelligence agencies.

While numerous officials acknowledge that it would be good to stand firm against Russia, most say Trump isn't capable of it.

His summit with Putin in Helsinki became controversial domestically after he and the Russian president held two hours of closed-door talks with no one else present but the interpreters.

"I would have suggested a different way," Director of National Intelligence Dan Coats said at the time.

The task is all the more complicated for the president because he has to work with a Congress that, even among his own Republican party, favors firmness towards Moscow.

"It's still a good decision for the US Very unlikely Trump would have delivered a stiff message to Putin personally," former diplomat Nicholas Burns said on Twitter.