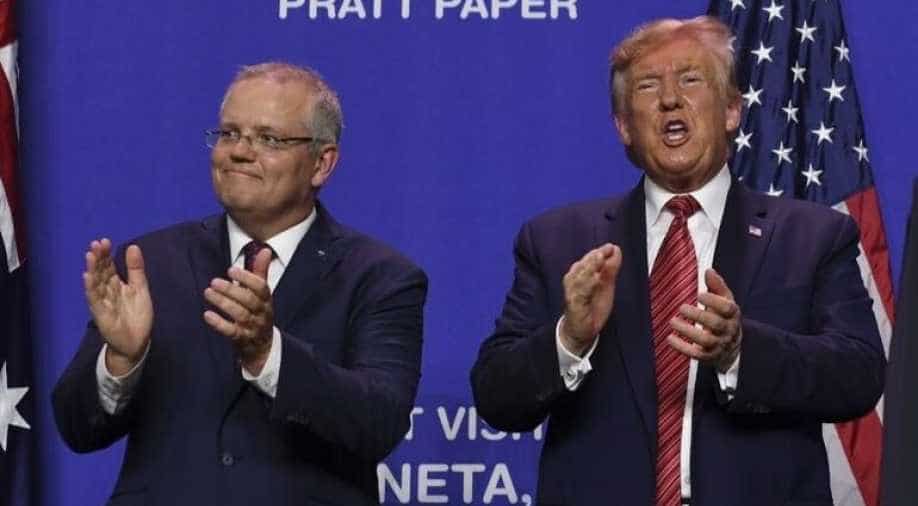 The official said 'Australia has always been ready to assist and cooperate with efforts that help shed further light on the matters under investigation'.

Donald Trump asked Australia to "assist" in discrediting a Russia investigation that has clouded his presidency, with Prime Minister Scott Morrison admitting Tuesday that he agreed to help.

An Australian government spokesperson confirmed Trump asked Morrison to investigate issues raised in Robert Mueller's probe, which concluded that Russia tried to swing the 2016 election in the Republican's favour.

The official said Australia "has always been ready to assist and cooperate with efforts that help shed further light on the matters under investigation".

"The PM confirmed this readiness once again in conversation with the President."

The revelation will fuel allegations Trump is using the power of the Oval Office and risking long-standing relationships with allies for his own political ends.

Mueller's probe concluded in March and led to the conviction of several of Trump's top aides for obstruction and lying to investigators.

But ahead of the 2020 election Trump has painted the probe and its findings as a "deep state" conspiracy, pointing to conservative media reports as evidence and urging the Justice Department to launch counter-investigations.

The New York Times, which first reported Trump's Australian request, said the White House had restricted access to the transcript of the Trump-Morrison call, in a similar way to its handling of Trump's recent call with Ukrainian President Volodymyr Zelensky.

Several other calls and meetings between Trump and foreign leaders, including Russia's Vladimir Putin are now under scrutiny.

Separately, the Washington Post reported that Attorney General Bill Barr has had multiple contacts with officials and spies in Australia, Britain and Italy in a bid to investigate Mueller and US intelligence findings.

State visit
At Trump's encouragement, Barr's Justice Department is examining the roots of the Mueller probe, including the evidence that led the CIA, FBI and other intelligence agencies to declare that Russia did, in fact, interfere in 2016 to boost Trump.

Australia and Britain were both important because the original FBI Russia meddling probe was launched in July 2016 after the bureau received a tip from an Australian diplomat in Britain about a meeting between people tied to Russian intelligence and a Trump campaign official.

In a May letter to Barr and White House chief of staff, Mick Mulvaney cited by Australian media Tuesday the country's ambassador in Washington also offered to help.

Morrison recently enjoyed a state visit to Washington and his close ties to Trump had already been facing scrutiny at home.

"It was risky for the Morrison government to get so cosy with Trump when almost no other government has done so," said Emma Shortis of the Royal Melbourne Institute of Technology.

"I think this development shows just how risky that is, Trump will come calling for favours, embroil you in controversy, and put relationships at risk", she added.

In a statement, the Justice Department defended contacts abroad and said Trump and Barr's roles were to help investigator John Durham make contacts.

"At Attorney General Barr's request, the president has contacted other countries to ask them to introduce the attorney general and Mr Durham to appropriate officials," she said.