To Be (a Shakespeare lover) or Not To Be? 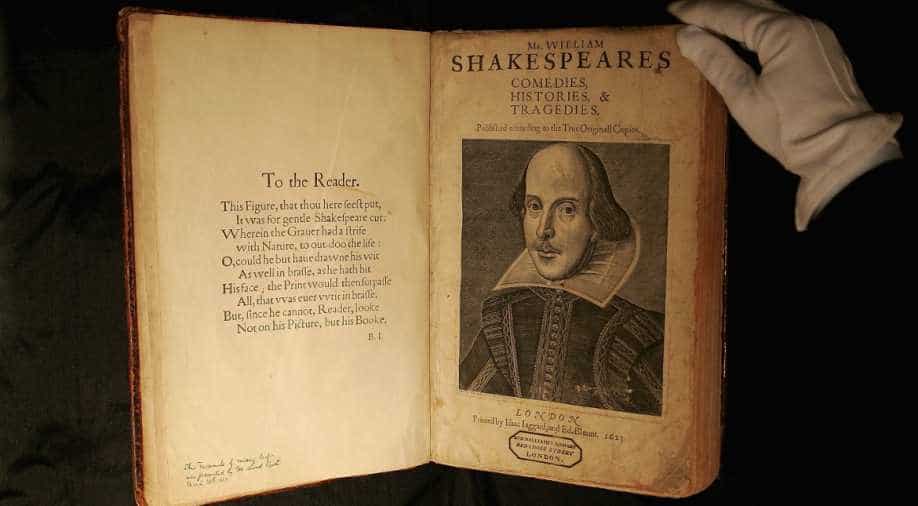 India has a strange love-hate relationship with William Shakespeare. Much to the chagrin of the post-colonial intelligentsia, it is easier to find people who have at least heard of Shakespeare than, say, Kalidas. Photograph:( Getty )

In the summer of 2005, that’s how a professor of mine introduced himself in the MA classroom housed in the red-bricked Faculty of Arts building of Delhi University. Most of us were offended by that irreverent laughter and many decided to skip his classes altogether. How could he do this to “Hamara (our) Shakespeare”?

More than a decade later, I realise the gravitas behind that giggle. A giggle that was a nod to William Shakespeare’s lifelong commitment to the idea of "play" in all the ways possible. An idea that may find consonance with the idea of “Leela” in Hinduism. Professor Harish Trivedi never took Shakespeare more seriously than the playwright took himself.

Yet, it's wrong to think of him as an embodiment of humility. As a matter of fact, what irked his contemporaries- the University Wits especially- was his utter disregard for the idea that creative genius was directly proportional to immersion in intellectual ideations. His acceptance of his “little Roman and lesser Greek” was firmly rooted in his confidence that he would still hold to ransom the attention of his readers’ and audience.

But, was Shakespeare anti-intellectual? Nay, far from it. Shakespeare’s works prefigure almost all the modern day intellectual enquiries in the world of liberal arts. While his Othello and Lucrece talk about killings and suicides for honour, his Shylock asks questions on persecution based on religious stereotypes. Look around in India, we are grappling with similar challenges. His Prospero takes us back to Platonic mimesis, his Lear performs Aristotelian catharsis. His Juliet and Cleopatra live and die beatifically as equals to the men they loved. His Lady Macbeth wants to unsex herself to rid herself of the frailties of womanhood, his Rosalind cures young men of their flippancy. His Antony speaks of the Renaissance ideals of statecraft and manhood, his Titania raises the question of sexual slavery.

Yes Shakespeare was playing to the gallery. Yes he was giving his audience what they desired: exotic locations, outlandish situations, phrases that titillated, stories that reinstated national pride and songs that could be set to music to soothe their souls. So much so, he probably wrote his scenes to suit the architecture of the theatres they would be performed at. Historian Julian Bowsher speculates that the battle scenes of Shakespeare’s Henry V may have been written to suit the long, narrow stage of one of the earliest purpose-built theatres in London, the Curtain. Yet, there is an underlying aspiration to expose his audience to ideas they were not exposed to hitherto. He chose performance over pedagogy. Maybe because he understood both his limitations and strengths very well. He made the most of the conflicts and contradictions of his age.

Yes Shakespeare was playing to the gallery. Yes he was giving his audience what they desired

Now going back to playing to the gallery bit, does the idea sound familiar? That’s what our cinema does. No wonder, Shakespeare is such a hit with filmmakers. From Baz Luhrmann of Hollywood to Sanjay Leela Bhansali and Vishal Bhardwaj of Mumbai, from Spanish Jose Maria Cartellvi to Italian Franco Zeffirelli, every noted filmmaker has tried his craft to bring Shakespeare’s Romeo and Juliet alive on screen. The quantum of Shakespearean adaptations lends itself to be treated as a separate genre.

Habib Tanveer’s “Kaamdev ka Apna Vasant Ritu Ka Sapna,” a Chhattisgarhi adaptation of A Midsummer Night’s Dream, has little in common with Rajat Kapoor’s irreverent clown adaptations of Hamlet, King Lear, As You Like It and Macbeth. Yet, they are all acculturative tributes to the Bard. While Benedict Cumberbatch sets TV screens on fire in a BBC skit based on Hamlet, Leonardo DiCaprio as Romeo in Luhrmann’s cinematic extravaganza wins many a heart apart from that of his Juliet’s. Paapa Essiedu as a black Prince Hamlet and Phyllida Lloyd’s all women Julius Caesar and Henry IV, push the envelope further. Dr Poonam Trivedi, a Shakespeare scholar at University of Delhi, recalls her conversation with an office clerk who casually remarked, “Everyone in our film industry has been earning a livelihood courtesy Shakespeare".

India has a strange love-hate relationship with William Shakespeare. Much to the chagrin of the post-colonial intelligentsia, it is easier to find people who have at least heard of Shakespeare than, say, Kalidas. Blame it all, first, on the East India Company and then Mr Macaulay. Shakespeare was being performed in Calcutta in as early as 1755, barely a century and a half after his death. It was only natural, then, that in the Merchant Ivory production Shakespeare Wallah we come to know about the story of a British family troupe “Shakespeareana” managed by Geoffrey Kendall that found itself traversing across the length and breadth of India, performing Shakespeare to dwindling audiences. Shakespeareana, by the way, was also responsible for one of the most endearing real life Romeo Juliet stories: that of Shashi Kapoor and Jennifer Kendall, Geoffrey Kendall’s beautiful daughter. Kapoor and Kendall elope to marry each other since Mr Kendall did not approve of the young man, who was but an actor in the troupe. Good for onstage courting, not the green room dilly-dallying: Thus thought the Sahib till it was time for the empire to strike back!

It was not till the late nineties that Indian universities thought of thinking beyond the canonical British literature in their English departments. Names like Ilanko Atikal, Andal, Bhavabhuti, Lal Ded, R K Narayan, Jayanta Mahapatra, G M Muktibodh sat beside the smug Sidneys, Spensers and Donnes on the syllabi

It was not till the late nineties that Indian universities thought of thinking beyond the canonical British literature in their English departments. Names like Ilanko Atikal, Andal, Bhavabhuti, Lal Ded, R K Narayan, Jayanta Mahapatra, G M Muktibodh sat beside the smug Sidneys, Spensers and Donnes on the syllabi. Shakespeare largely survived this long-awaited cultural and academic revisionism. In Delhi University BA and MA students still study a fair chunk of Shakespearean plays and poetry. My speculation on Shakespeare’s academic survival is simply this: not only are our students more familiar with his name than most of his contemporaries or successors, his works invite our students to embark on a journey of identification and self-identification. Harold Bloom has fiercely argued for Shakespeare’s neat invention of the "human". Not only did he carefully craft his own poetic persona, he crafted human characters that other human beings, his readers, could identify with admiration or repugnance.

If we can make the most conspicuous cultural and literary icon of the coloniser our own -- through wrongly spelt street names, insults like “Shakespeare ki Aulaad” hurled at a westernised upstart and many such nonchalant allusions to him -- what can we not do for our indigenous culture pool! I see Shakespeare’s enduring legacy in India as nothing threatening. On the contrary, it is a portent that art and literature have the power to mitigate the horrors of bad politics or even genocides. The bloody wounds of our colonial history received a salve in the form of cultural enrichment.

Now, I do not mean to oversimplify colonialism and its ills. I am no apologist for it. My limited point here is that when artists and writers find transnational acclaim, it enriches the cultural sum total of humanity. Our Kalidas and their Shakespeare can co-exist. While we have many flashpoints in terms of race relations in Shakespeare, it is a bit unfair to anachronistically expect him to conform to our liberal worldview. Intermingling of fools and royals that irked many a Shakespearean scholar was indeed a sample of Shakespeare’s liberalism. Something that Bakhtin calls the celebration of diversity, the carnival.

If we expect the dead writers to sing in our voice, is it a tall order, then, to lend them that voice? Shakespeare has been worked upon in many countries, many contexts. He belongs to all those who claim him as their own. Noted Tamil author and playwright Padmashri Dr Indira Parthasarathy’s transcreation of The Tempest has the story of Dashavataram, a Hindu legend on ten incarnations of Lord Vishnu. A theatre festival in Chennai “Hamara Shakespeare”, organised by an arts foundation closes the case on who "owns" Shakespeare. It is endeavours like these that have gone into the making of the legend of Shakespeare.

This brings us to the issue of disputed authorship of some of Shakespeare’s texts. Recently, Christopher Marlowe has been acknowledged as his co-author of Henry VI, Parts I, II, and III by the editors of The New Oxford Shakespeare. Is the disputed authorship an outcome of willing suspension of disbelief on the part of Shakespeare’s fans? Whatever is good, if the authorship is unclear, attribute it to the Bard! I doubt if poor Shakespeare would have intentionally passed off someone else’s works as his own. It must be remembered that the Elizabethan Age was an age of collaborations.

If we expect the dead writers to sing in our voice, is it a tall order, then, to lend them that voice? Shakespeare has been worked upon in many countries, many contexts. He belongs to all those who claim him as their own

An oft repeated comment on the commentaries on Shakespeare is that the critics invented him just as he invented his characters. It is true of any writer/artist and truer of Shakespeare. No wonder extrapolations, speculations are an integral part of Shakespeare studies. The recently concluded biennial conference of Asian Shakespeare Association in New Delhi commemorating the 400th anniversary of the Bard’s demise was a momentous occasion.

The conference saw the participation of more than 70 foreign delegates who brought along Shakespeares from their respective countries and cultures. Scholars and artists from across the world came together to ensure that Shakespeare remains relevant, not necessarily venerated. When noted actor, director and theatre personality Rajat Kapoor made his repertory perform I Don’t Like It, As You Like It in front of these scholars at National School of Drama, he received more applause than criticism. The irreverence of his motley cast of clowns was acknowledged as a befitting tribute to the playwright whose "fools" are immortal.

Dr Poonam Trivedi, organiser of the conference, shared how managing funds through sponsorships was a momentous task. The committee got some unexpected responses. Why should we spend even a dime for Shakespeare, he’s not our own, or, isn’t it time to move beyond Shakespeare asked the potential sponsors. If such questions are being asked in a cosmopolitan city like Delhi, it does not bode well for the health of our cultural wealth which is only enriched by making “others” our “own”.