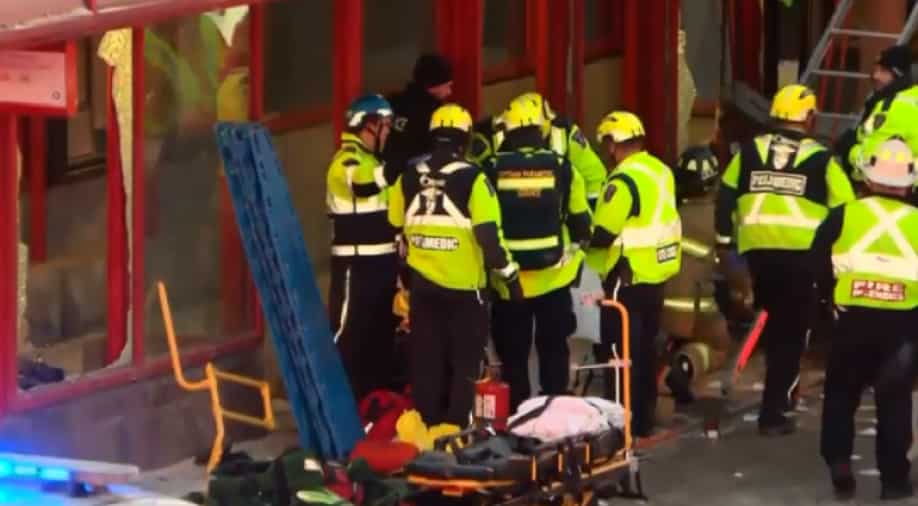 Emergency responders treating a number of people on the ground, as others used ladders to unload passengers trapped on the bus' upper level. Photograph:( Reuters )

Police chief Charles Bordeleau said 'several people were trapped on the upper level' of the bus before being freed.

A double decker bus ripped open when it struck a bus shelter in the Canadian capital on Friday, killing three people and injuring at least 23, officials said.

Images of the crash during the afternoon rush hour showed upper deck seats hanging from a gaping hole at the front of the bus, firefighters on ladders trying to reach the injured and a lineup of 25 ambulances waiting in the biting cold to take them to hospitals.

Police chief Charles Bordeleau said "several people were trapped on the upper level" of the bus before being freed.

Ottawa mayor Jim Watson told a news conference that three people died and 23 were injured in the "horrific" crash -- including 14 critically, according to paramedic services.

Two of the victims were passengers on the bus. The third had been standing on the station platform, Watson said.

Bordeleau said the bus driver was arrested at the scene and would be questioned as part of an investigation into the cause of the crash.