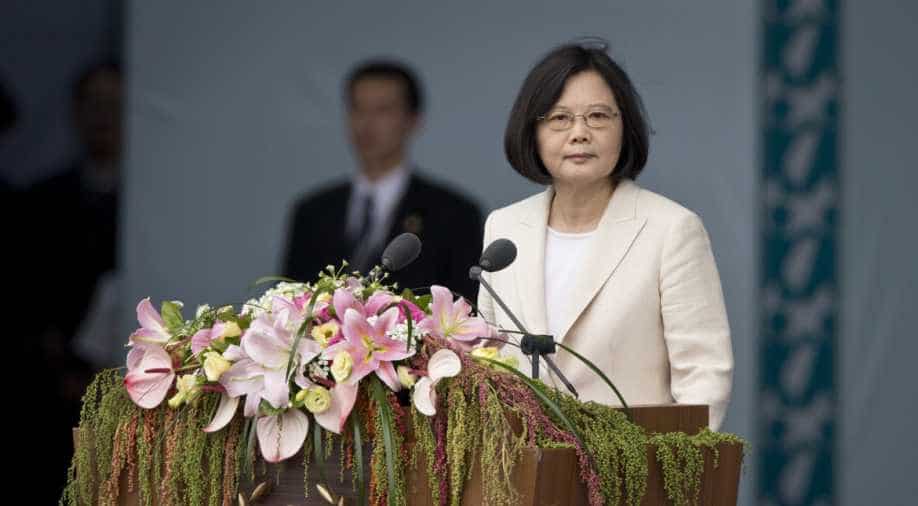 Taiwan's first female President,?Tsai Ing-wen, who was sworn?in this May, has repeatedly voiced her support for sexual equality and LGBT rights. Photograph:( Getty )

The ballot also features 10 referendums, including pro- and anti-gay marriage votes and a bid to change the name under which Taiwan competes at international sports events.

Millions of Taiwanese go to the polls Saturday in key elections which tap into a raft of divisive issues, from relations with Beijing to gay rights.

The island-wide vote for political representatives, from village up to city level, is a mid-term test for embattled President Tsai Ing-wen as she faces a backlash over domestic reforms and concerns about deteriorating ties with China.

The ballot also features 10 referendums, including pro- and anti-gay marriage votes and a bid to change the name under which Taiwan competes at international sports events that has already angered China.

The referendums come as an extra headache for Tsai and her ruling Democratic Progressive Party (DPP), which faces strong challenges in major seats.

Tsai has framed the local elections as a way to "tell the world" that Taiwan will not bow to Beijing, which has ramped up military and diplomatic pressure since she took office in 2016.

China sees self-ruling Taiwan as part of its territory and is incensed that Tsai will not acknowledge the island as part of "one China", unlike her predecessor Ma Ying-jeou of the Beijing-friendly Kuomintang (KMT).

Tsai was voted president by a landslide two years ago as the public feared the KMT were getting too close to Beijing and she has played up the importance of Taiwanese identity on the campaign trail.

She has called China's pressure "omnipresent", flagging up a recent row at the Golden Horse film awards in Taipei which saw a mainland actor referring to the island as "China, Taiwan" after a Taiwanese filmmaker had voiced her support for independence.

Taiwan's Investigation Bureau also says it is probing Chinese influence on the elections through campaign funding of candidates.

But the KMT is billing the local polls as a vote of no confidence in Tsai, vowing to promote peaceful relations with China and boost the economy.

Tsai's pension and labour reforms have been unpopular and despite a growing GDP, some voters complain they have not seen any benefits as salaries remain stagnant and the cost of living rises.

Some also blame cross-strait tensions for denting their livelihoods, including grass-roots groups that traditionally vote DPP.

Tsai Bao-hsing, head of Liuchiu Fisherman Association in Pingtung county, Tsai's hometown, said many of the group's members would vote KMT to "punish the DPP" for failing to promote the export of fish products to China as Taiwan seeks to diversify to other markets.

Polls open at 8:00 am local time (0000 GMT) with results not expected until late Saturday.