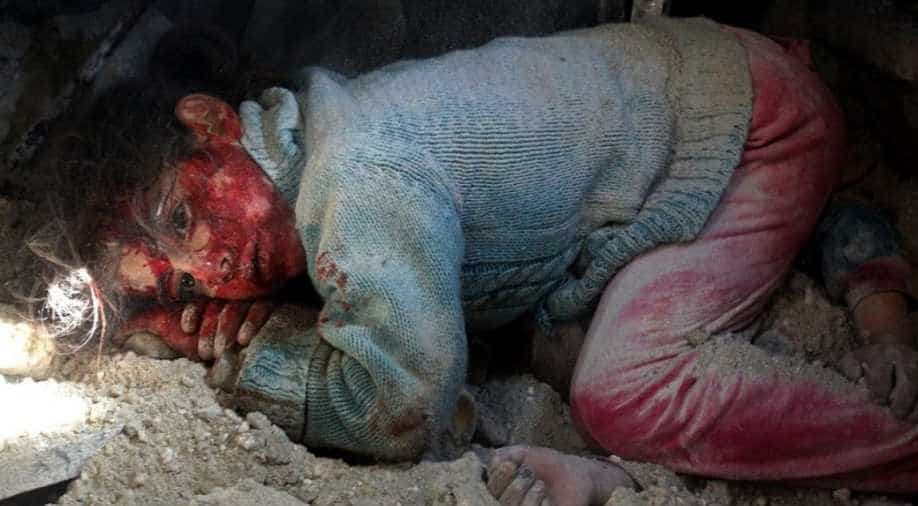 At least 384,000 people have since died, including more than 116,000 civilians, the Syrian Observatory for Human Rights war monitor says

When Syrian anti-government demonstrators first took to the streets on March 15, 2011, they could scarcely have imagined their protests would turn into a complex war entangling rebels, jihadists and outside forces.

At least 384,000 people have since died, including more than 116,000 civilians, the Syrian Observatory for Human Rights war monitor says.

The war has left cities and villages in ruins, shattered the economy and displaced more than 11 million people internally and abroad, with many seeking refuge in neighbouring countries and Europe.

"We've lost everything," said one of the displaced, Hala Ibrahim, a rights activist from Aleppo who now lives in Idlib province, the last rebel stronghold.

"I left my university, my house which was bombed," said the woman in her 30s.

"Nine years of revolution illustrate the extent of the suffering we have known, between exile, bombings and deaths."

Assad, with the military support of Russia, Iran and Lebanese militant group Hezbollah, has clawed back control of over 70 per cent of the war-torn country.

Neighbouring Turkey, which supports local armed groups, has deployed its troops across the border in Idlib province, now the last rebel bastion and refugee of millions of displaced people.

Syria's latest fragile ceasefire came into effect there earlier this month, and Turkish and Russian forces on Sunday kicked off joint patrols in Idlib, Russian and Turkish media said.

The first patrol was however very brief and largely symbolic, as the route was "shortened because of provocations", Russia's defence ministry said.

An AFP correspondent, covering a protest against the patrol some five kilometres (three miles) away, said it never arrived on that section of the M4 highway.

Around 200 protesters had gathered on the road near the town of Nayrab, some setting tyres alight or piling tree branches across the thoroughfare.

The March 5 ceasefire has for now stemmed a deadly Russia-backed military campaign on Idlib.

The assault has killed nearly 500 civilians since December, the Observatory says, and forced nearly a million to flee their homes and shelters, according to the United Nations.

Among those displaced, Siham Abs and seven of her children have been living for the past two months in a camp near Bardaqli, not far from the Turkish border.

Among the tents lined up along muddy paths, Abs said she and her family would like to wash, but don't know where.

"I am 50 years old and I've never known such difficult times," she said.

Many of those unable to find space in camps have been sleeping in fields or have sought shelter in schools, mosques and unfinished buildings.

The UN special envoy for Syria, Geir Pedersen, on Saturday said the enduring war was "proof of a collective failure of diplomacy".

"The suffering of the Syrian people during this tragic and terrible decade still defies comprehension and belief."

The Syrian conflict was born of unprecedented anti-government demonstrations in the southern city of Daraa.

The protests spread across Syria, but a violent crackdown soon saw rebels take up arms and wrest key areas from government control.

Jihadist groups also emerged, notably the Islamic State group which swept across large parts of the country and neighbouring Iraq in 2014.

Other foreign powers still operating in Syria include the United States whose troops, despite an announced withdrawal last year, are still stationed in the northeast, in a semi-autonomous Kurdish zone.

And Israel regularly carries out airstrikes on Syrian, Hezbollah and Iranian military positions.

The war has ravaged Syria's economy and infrastructure. The United Nations estimated in 2018 that the conflict had caused nearly $400 billion in war-related destruction.

Over half of all health facilities in Syria are non-functional, and two in five schools cannot be used, the UN children's agency says.

UN Secretary-General Antonio Guterres wrote this week on Twitter that "a decade of fighting has brought nothing but ruin and misery.

"There is no military solution. Now it is the time to give diplomacy a chance to work."