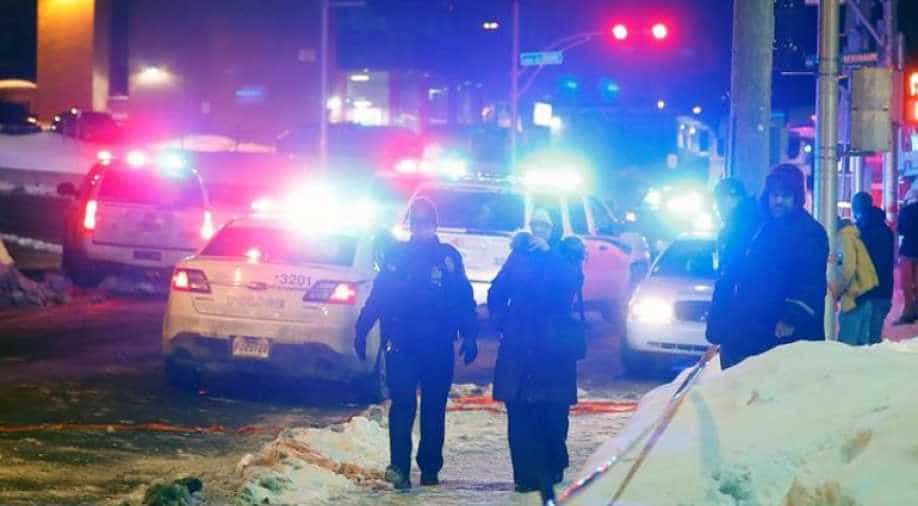 Police officers are seen near a mosque after a shooting in Quebec City. Photograph:( Reuters )

Six people were killed and eight injured after gunmen opened fire in a Quebec City mosque during evening prayers in an attack which the Canadian Prime Minister Justin Trudeau condemned as a "terrorist attack".

Police spokeswoman Christine Coulombe told journalists that two suspects were arrested following the attack that police were treating as a "terrorist act".

A witness told Reuters that up to three gunmen fired on about 40 people inside the Quebec City Islamic Cultural Centre.

"Why is this happening here? This is barbaric,” said the mosque's president, Mohamed Yangui.

Quebec police on the scene said there had been fatalities and that two people had been arrested.

"There are many victims ... there are deaths," a Quebec police‎ spokesman told reporters.

A witness said a heavily armed police tactical squad was seen entering the mosque. Police spokesman Etienne Doyon declined to say whether there was still a gunman inside the mosque.

Police later tweeted: "The situation is under control."

Yangui, who was not inside the mosque when the shooting occurred, said he got frantic calls from people at evening prayers. He did not know how many were injured, saying they had been taken to different hospitals across Quebec City.

Canadian Prime Minister Justin Trudeau said on Twitter: "Tonight, Canadians grieve for those killed in a cowardly attack on a mosque in Quebec City. My thoughts are with victims & their families."

Tonight, Canadians grieve for those killed in a cowardly attack on a mosque in Quebec City. My thoughts are with victims & their families.

Trudeau condemned the shooting as a "terrorist attack".

He said in a statement that "we condemn this terrorist attack on Muslims in a center of worship and refuge".

"Muslim-Canadians are an important part of our national fabric, and these senseless acts have no place in our communities, city and country."

Like France, Quebec has struggled at times to reconcile its secular identity with a rising Muslim population, many of them North African emigrants.

In June 2016, a pig’s head was left on the doorstep of the cultural centre.

"We are not safe here," said Mohammed Oudghiri, who normally attends prayers at the mosque but not on Sunday.

Oudghiri said he had lived in Quebec for 42 years but was now "very worried" and thinking of moving back to Morocco.

Canadian Public Safety Minister Ralph Goodale said in a tweet that he was "profoundly saddened by the loss of life and wounded."

Incidents of Islamophobia have increased in Quebec in recent years. The face-covering, or niqab, became a big issue in the 2015 Canadian federal election, especially in Quebec, where the vast majority of the population supported a ban on it at citizenship ceremonies.

In 2013, police investigated after a mosque in the Saguenay region of the province was splattered with what was believed to be pig blood.

In the neighboring province of Ontario, a mosque was set on fire in 2015, a day after an attack by gunmen and suicide bombers in Paris.

Zebida Bendjeddou, who left the mosque earlier on Sunday evening, said the centre had received threats.

"In June, they'd put a pig's head in front of the mosque. But we thought: 'Oh, they're isolated events.' We didn't take it seriously. But tonight, those isolated events, they take on a different scope," she said.

Bendjeddou said she had not yet confirmed the names of those killed, but added: "They're people we know, for sure. People we knew since they were little kids."