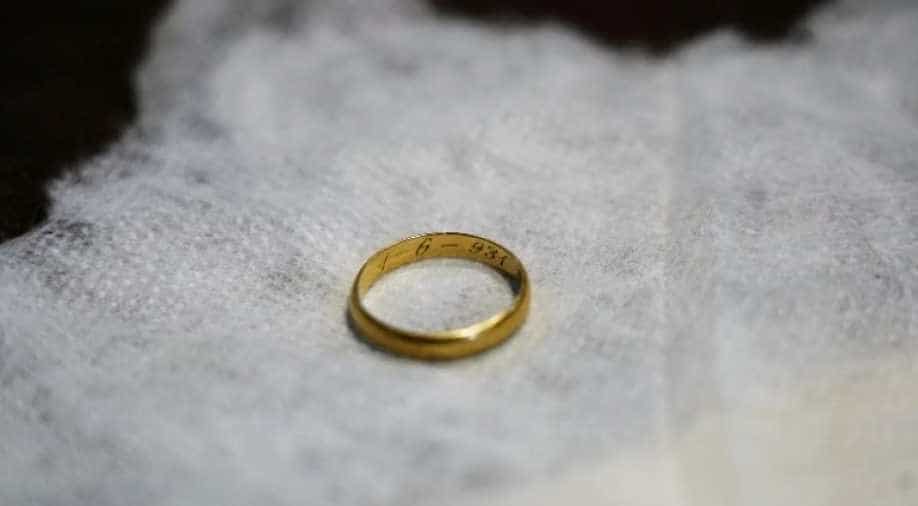 The wedding ring of Eugenio Insua is seen during the exhumation of a mass grave by the Association for the Recovery of Historical Memory (ARMH), Insua is one of the 17 people who were killed by the forces of dictator Francisco Franco in July 1936 at the E Photograph:( Reuters )

The discovery of the ring by the Historic Memory Recovery Association (ARMH) confirmed the resting place of Eugenio Juan Insua, which his family had tried to find out for decades in vain

A wedding ring worn by her father 84 years ago when he was shot dead by General Francisco Franco's fascist forces finally gave certainty to Rosa Maria Insua, who received it, tears in her eyes, last week at the site of a mass grave found near Madrid.

The discovery of the ring by the Historic Memory Recovery Association (ARMH) confirmed the resting place of Eugenio Juan Insua, which his family had tried to find out for decades in vain.

More than 110,000 people are still considered missing since the 1936-39 Spanish Civil War and Franco's dictatorship that ended in 1975, which remain divisive subjects in Spain.

Also read: Spain's former king Juan Carlos has been in UAE since August 3

The left-wing coalition government on Tuesday approved a draft 'democratic memory' bill that envisages state-funded exhumation of the bodies of victims of war and the dictatorship, with the aim to help families like Insua's to bury them alongside their loved ones or claim state pensions.

"What a joy, we always thought he was here, but this gives us a lot of certainty," the 84-year-old said, thanking ARMH researchers who found the ring with her parents' 1931 wedding date - 1-6-931 - engraved on the inside in a mass grave in El Espinar, 65 km northwest of Madrid.

"I've been rather frail lately. Years are going by and I'd be very happy for this all to be solved, to be over, in peace," she told Reuters.

Eugenio Juan Insua was killed in July 1936 at the age of 29 in an ambush along with 16 other defenders of the Republican government, just days after the war broke out.

"I hope he will be genetically identified so that the family can bury him where they want and not where the murderers decided to in 1936," said ARMH deputy head Marco Gonzalez.

The association's president Emilio Silva said there was much work to be done yet across Spain: "We are talking about a drop in the ocean. There are 114,226 people missing and we are an association that is trying to resolve a small part of this problem without any public help".

The government has already taken a series of steps to remove dictatorship-era symbols, including last year removing Franco's remains from a massive mausoleum near Madrid.

But the recent rise of the far right such as the party VOX, already the third-largest force in parliament, makes Insua "scared that there could be an election after which they'll say 'that's it, we don't do this (mass grave search) anymore'".