1 year of Trump: Protesters flock in droves to women's marches 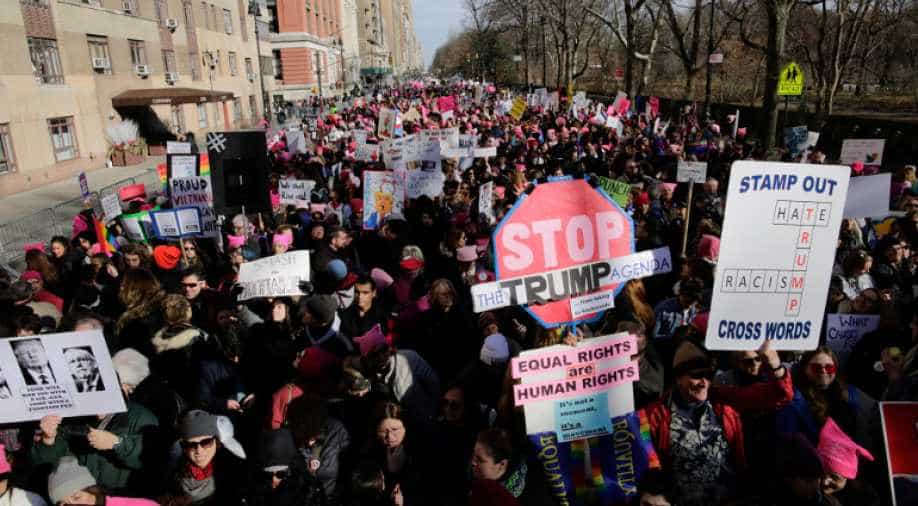 More than 300 towns and cities had organised anniversary marches and rallies. Other protests are set for Sunday, notably in Las Vegas, as well as in several European cities including Berlin Photograph:( Reuters )

Protestors took to the streets en masse across the United States Saturday, hoisting anti-Donald Trump placards, banging drums and donning pink hats for a second Women's March opposing the president -- one year to the day of his inauguration.

Hundreds of thousands of marchers assembled in Los Angeles, New York, Washington, Chicago, Denver, Boston and other cities nationwide, many donning the famous pink knit "pussy hats" -- a reference to Trump's videotaped boasts of his license to grope women without repercussions.

Protestors hoisted signs emblazoned with slogans like "Fight like a girl", "A woman's place is in the White House" and "Elect a clown, expect a circus."

The largest demonstrations were in cities where Trump performed poorly at the polls: the Los Angeles mayor said estimated turnout in his city was 500,000, while New York police estimated about 200,000 protesters.

In Manhattan, a diverse crowd descended on Central Park West, the avenue that borders the city's beloved park and arrives at the foot of the Trump International Hotel -- part of the magnate-turned-commander-in-chief's real estate empire.

"We live in an alternate universe -- it is so bad," said Althea Fusco, 67, who traveled to the city from upstate New York with two neighbors.

"I see an erosion of democracy," she said.

Speakers at the New York rally included activist and actress Rosie Perez and entertainer Whoopi Goldberg, who emphasized that "we are here to say -- as women -- we're not taking it anymore."

Throngs of demonstrators paraded in Los Angeles, where actress Natalie Portman was among the celebrities pumping up the crowd: "Because of you the revolution is rolling."

"The way Trump has treated women and still been elected -- I want him to be aware that we are coming together as a powerful force and we're going to change this," said 44-year-old artist Heather Arndt in the California metropolis.

The marches aim to build on the movement launched last year when more than three million people turned out nationwide to voice opposition to Trump.

A group of people wearing 'pussyhats' board the subway as they head toward the Women's March in Manhattan, New York. (Reuters)

The weekend of demonstrations is aimed at translating enthusiasm into political action with the theme "Power to the Polls" -- a message designed to drive voter registrations and maximize women's involvement in the 2018 midterm elections.

The president meanwhile posted a deadpan tweet referencing the rallies protesting his policies, urging people to "get out there and celebrate the historic milestones and unprecedented economic success and wealth creation that has taken place over the last 12 months."

"Beautiful weather all over our great country, a perfect day for all Women to March," he wrote.

Many of the demonstrations indeed took place under sunny skies but marchers in Park City, Utah -- where the annual Sundance Film Festival is underway -- braved chilly temperatures and steady snow to make their voices heard, led by celebrities including activist and actress Jane Fonda.

This year's edition of Sundance took on a political bent in light of the #MeToo movement against sexual misconduct, a campaign that has rippled through Hollywood and beyond since scores of actresses leveled sexual assault allegations against disgraced mogul Harvey Weinstein.

Crowds in the North Carolina city of Charlotte heard an address from its first black female mayor, while Washington protestors rallied at the foot of the Lincoln Memorial and marched to the White House, speaking out on a raft of issues ranging from immigrant protections to racial equality to sexual assault.

"We feel like our work isn't done and that there's so much more that we need to fix," said Tanaquil Eltson, 14, who also participated in Washington's 2017 march.

"I know the world around me isn't happy colors; it's scary. But I'm excited to be able to fix it," she said, clad in a red and blue Superwoman outfit.

Her mother Vitessa Del Prete, a retired US army lieutenant colonel, pointed to the recent flood of sexual abuse and harassment allegations against powerful men that has galvanized women to fight back against injustice.

"I've lived through decades of sexual harassment issues and it's getting better -- but it's nowhere near where it needs to be," the 51-year-old said, sporting a Wonder Woman costume in coordination with her daughter.

"Issues that face women are just not being represented well enough in our country, so it's a privilege to be able to get out here and try to do something from a citizen standpoint."

More than 300 towns and cities had organized anniversary marches and rallies. Other protests are set for Sunday, notably in Las Vegas, as well as in several European cities including Berlin.

"We cannot rest," said Pam Morris in Washington. "We have to keep energized until we overcome this administration."

"We cannot get worn down. We have to be here."