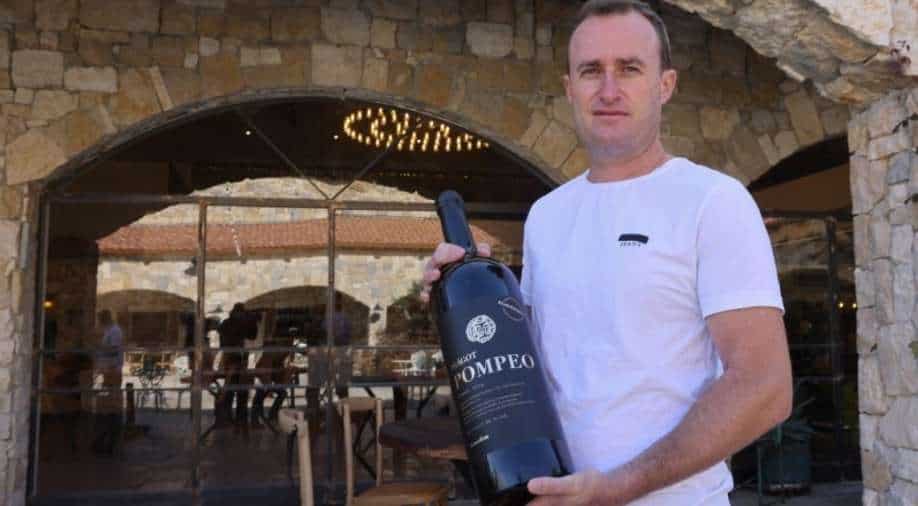 Israeli winemaker Yaakov Berg's holds a bottle of his red blend named after US Secretary of State Mike Pompeo at the Psagot Winery in the settlers industrial park of Sha'ar Binyamin near the Israeli Psagot settlement in the occupied West Bank north of Jerusalem Photograph:( AFP )

Pompeo went to the winery on Thursday, becoming the first top American diplomat to visit a West Bank settlement on a tour that has outraged the Palestinians

Israeli winemaker Yaakov Berg captured attention by naming his red bled after US Secretary Mike Pompeo, but he said the tag on the label's top right corner, #madeinlegality, is as important as the name.

Berg's immaculately-furnished Psagot Winery sits on a hilltop in the occupied West Bank, with a stunning panoramic view overlooking the Palestinian village of Mukhmas.

For much of the international community, the winery is located in Palestinian territory illegally seized by the Jewish settlers.

Pompeo went to the winery on Thursday, becoming the first top American diplomat to visit a West Bank settlement on a tour that has outraged the Palestinians.

Berg spoke to AFP the day before Pompeo's visit, as his staff organised flowers, set tables in the restaurant and decorated the cobble-stoned property with US and Israeli flags.

Berg exports his products to Europe and has waged an unsuccessful legal campaign against guidelines on labelling products identifying their origin as territories occupied by Israel.

When Pompeo announced last year that President Donald Trump's staunchly pro-Israeli administration no longer considered Jewish settlements in the West Bank illegal, Berg saw it as historic announcement that will entrench the US envoy "in the history of the Jewish people".

Pompeo's support will ensure he is remembered by Jews "100 years from now," Berg said.

"I felt like we need to honour him, to thank him, to really show some appreciation," Berg said about the decision to name a wine after him.

For Berg, the #madeinlegality label affixed to his Pompeo blend is not a branding gimmick but a statement about "morality".

"We are not thieves. We didn't (steal) this land," he told AFP, categorically rejecting the notion that his winery is on land where Israelis do not belong.

According to the Israeli anti-occupation organisation Peace Now, the Psagot Winery is on "stolen land", taken incrementally from the Palestinians who owned it.

"A significant portion of the grapes from which the wine is made come from plundered soil," Peace Now said.

It called Pompeo's visit "a last pathetic attempt to undermine the prospects for peace by normalising the settlements".

President-elect Joe Biden has said his administration will restore US opposition to settlements.

Berg, like Pompeo, was not prepared to acknowledge Trump's election defeat.

"We have been hoping that he will be elected to a second (term)," he said. "Let's wait and see."

But, asked about the prospects of renewed US hostility to settlements under Biden, Berg argued that from his perspective, Trump's approach had clearly worked.

"We have peace, we have quiet," he said. "We have our Palestinian neighbours and we believe we can live together."

Berg insisted that any peace process that relies on Jews leaving Judea and Samaria, the term many Israelis use for the West Bank, is doomed to fail.

"We are here forever," he said. "We have been praying to come back to Israel and specifically to here for 2,000 years ... We didn't conquer. We just came to our homeland."