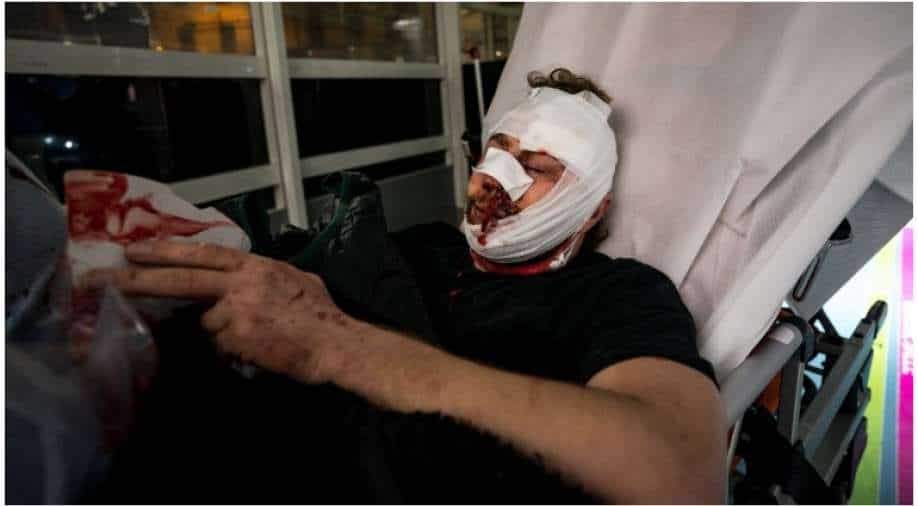 Syrian freelance photographer Ameer Al Halbi, covered with bandages, lies on an hospital bed after being injured during clashes in a demonstration against the 'global security' draft law, which Article 24 would criminalise the publication of images of on-duty police officers with the intent of harming their 'physical or psychological integrity', in Paris, on November 28, 2020. Photograph:( AFP )

Ameer al-Halbi, a freelance photographer who has previously worked for AFP, was trapped for several hours after getting hurt. He was unable to go to hospital despite receiving head wounds

An award-winning Syrian photojournalist, who was wounded in a Paris protest against police brutality said on Sunday that his ordeal reminded him of the civil war in his home country.

Ameer al-Halbi, a freelance photographer who has previously worked for AFP, was trapped for several hours after getting hurt. He was unable to go to hospital despite receiving head wounds.

AFP quoted a police source tp say that an internal administrative inquiry had been opened to determine the circumstances under which al-Halbi was hurt in the protests.

"I am better this morning," said al-Halbi, who won several international awards for his coverage of the Syrian conflict in his home city of Aleppo for AFP.

"But the shock was very heavy, especially yesterday when I found myself wounded, bleeding heavily in my face and stuck for two hours in the demonstration -- wedged between demonstrators and the police who did not want to let us out to get to hospital," he told AFP.

"Images of Syria surged back into my head... I was aged 15 when I found myself blocked in a demonstration in Aleppo, wounded by two bullets in my hand. It was Aleppo that came back to me last (Saturday) night."

He said that when police had began a charge to disperse the crowds in Paris he was in a group of four to five photographers who were "clearly recognisable" as such.

Al-Halbi, who has also worked for Polka magazine, was seen with a bruised face and much of his head covered in bandages in AFP photos.

Christophe Deloire, secretary general of Reporters Without Borders, tweeted that the 24-year-old had been wounded at Place de la Bastille by "a police baton".

Polka Magazine and AFP both condemned the incident in statements Sunday.

"We are shocked by the injuries suffered by our colleague Ameer al-Halbi and condemn the unprovoked violence," said Phil Chetwynd, AFP's global news director, demanding that the police investigate the incident.

A statement from Polka magazine also condemned the "police aggression" against Alhalbi.

The magazine's Director of Publication Alain Genestar said the incident was "all the more shocking and reprehensible" because he was clearly identified as a press photographer.

Al-Halbi won second prize in the "Spot News" category for the World Press Photo in 2017.