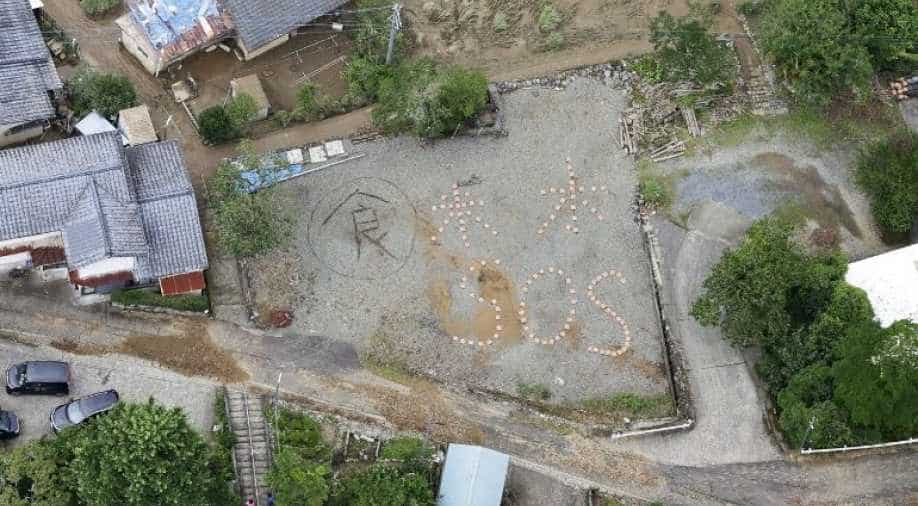 An aerial view shows the words "Rice, Water, SOS" spelled out on the ground in the flood-ravaged Kuma village, Kumamoto prefecture, southern Japan, in this photo taken by Kyodo July 5, 2020 Photograph:( Reuters )

Nearly 40 people were feared dead as torrential rains continued to hit Japan's southwestern island of Kyushu, with river banks at risk of bursting on Monday morning and new evacuation orders put in place.

Flooding and mudslides that began at the weekend have killed 21 people so far. A further 18 people were showing no vital signs and presumed dead pending official confirmation, and 13 people were missing, Chief Cabinet Secretary Yoshihide Suga said at a news conference.

"I offer my deepest condolences for those who have passed from the torrential rains," Suga said, adding that some 40,000 members of the Self-Defence Force were involved in rescue missions.

He added that evacuation centres were also working on preventing the spread of the novel coronavirus by distributing disinfectant and asking evacuees to maintain their distance from each other.

As of Saturday, some 200,000 have been ordered to evacuate their homes, according to Kyodo news agency.

The floods are Japan's worst natural disaster since Typhoon Hagibis in October last year that left about 90 people dead.